TNA's New Motto: Those Who Fail To Learn from History End Up Repeating It 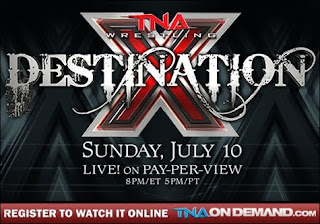 Before I get into the meat of this blog, let me say for the record, I am looking forward to the Destination X pay per view and think it could be one of TNA’s best pay per views of the year from a wrestling standpoint. Want to make that clear because what I’m about to write will most likely come off as more TNA bashing.
The Destination X pay per centers around the X-Division. TNA is bringing back the 6-sided ring as well as bringing in past X-division stars and new competitors to fill out the card.
The semi-main event is a match between Rob Van Dam and Jerry Lynn. RVD and Lynn had a series of matches that set the standard for pre-X Division action back in the original ECW during the late ‘90s. Again, this show should be really entertaining for the in ring content, but I question the reasoning and long-term effect of the show.
TNA didn’t really explain why the 6-sided ring is being used. AJ Styles simply said they should bring it back for one night only. During the first two years of TNA’s existence there was no 6-sided ring.  All the matches took place in the standard wrestling ring. This means the 6-sided ring isn’t needed for the matches and its only purpose is as a special attraction to gain interest in the show.  That’s not a bad thing necessarily however when the show is over and the regular ring comes back for Impact and the next pay per view, will anything be gained from using the 6-sided ring?
While I’m excited to see some new X-division talent (or at least new to TNA) get the chance to shine on pay per view, are these guys going to stick around after the pay per view or will they follow in the footsteps of Randy Savage, Test, Rikishi, and Chyna? Guys are brought in for one or two shows and then get shown the door once Destination X is over due to the X-division being pushed to the backburner again. 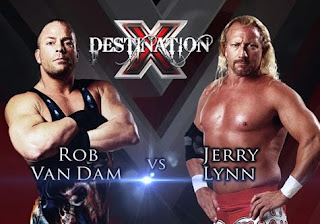 Then you have the RVD vs. Jerry Lynn match. I admit I was a huge ECW mark from 1997-2001. Still think the best show I’ve attended live was ECW’s Heatwave ’98 pay per view. Last year when TNA did the ECW tribute show Hardcore Justice, RVD and Lynn were supposed to wrestle until Lynn suffered an injury while training for the match.  Yes, the series of matches in ECW between Van Dam and Lynn are legendary. Yes, the matches paved the way for many current X-division wrestlers. Does the match need to take place? I guess no match NEEDS to take place, but in my opinion this is another example of TNA trying to live off another company’s glory instead of making their own history.  After Destination X will Jerry Lynn stick around or ride off into the sunset?
Destination X should be worth the cost of the show, which can rarely be said for most pay per views these days. My biggest opposition to the show is it feels like a tribute show some local independent promotion would be putting on instead of the number two promotion in the country. I’ll take back any criticism I’ve laid out if after Destination X, TNA keeps a solid focus on the X-division and keeps the returning and new guys around utilizing them as more than bodies on Explosion.
Check our Facebook page for updates throughout the day. Follow on Twitter for daily commentary. Watch our colorful cast of characters on YouTube.
Posted by Kevin Hunsperger at 1:07 PM