I'm breaking one of my self imposed rules of writing a wrestling blog.  Don't report on rumors.  It just helps spread the untruths and makes the world a rotten place.  But I'm going to break my rule, or at least bend it.

There's a lot of buzz that Mick Foley is legitimately finished with Impact Wrestling.  I missed the show last week with Hulk Hogan "firing" him.  Usually in wrestling, when there's an on air firing, it's done to give a character time off.  But a lot of folks seem to think that Foley is in fact finished with TNA.  His own Twitter account has fueled that speculation.  I'm still not sure what to believe because even when something in the business isn't a work, it really is.

Personally, I hope Foley is finished with TNA.  I never wanted to see him leave the WWE.  He needs to come back home, but NOT as a wrestler.  No, I'm a firm believer that when a wrestler says he's retiring and not going to overstay his welcome that he live up to that statement.  It was 11 years ago that Foley uttered those words.  Since that "final" match with Triple H in 2000, how many additional matches has he had?  And I don't blame Foley for that at all.  Wrestling is like a drug.  Whether you're the performer or the fan watching it.  It's hard to give up for anyone. 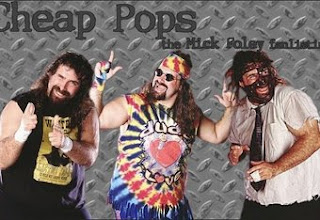 Actually, managers.  Let me explain.  I've been playing with this scenario in my head.  And I think it's a good idea if I do say so myself.  What if the "3 Faces of Foley" became managers.  Each personality could have a different charge.  We know Foley can talk, so I have no doubt he could pull off the manager role.  Of course the only obstacle I see with the gimmick would be when it comes time for one of Dude Love's guys to face or team with one of Cactus Jack's or Mankind's guys.

Or try this on for size.  Cactus Jack manages let's say Husky Harris (since Harris seems to be out of the Nexus now).  Maybe Dude Love could manage Zack Ryder and Curt Hawkins and get that tag team going again.  Then Mankind hosts a new talk show segment similar to Piper's Pit, but in the boiler room of the building.

So that's my big idea for Mick Foley if he has truly left TNA and if Vince McMahon rehires him.  It would definitely be something different and I think Foley could really pull it off.