It seems that it's becoming hip, or maybe not, for wrestlers to engage in a war of words on Twitter.  A year or so ago, Chris Jericho (@imajericho) and the Miz (@mikethemiz) did some playful back and forth insults to one another.  I found it entertaining and laughed at most of the jokes, knowing they were just that, jokes.

In recent months though, some wrestlers are using their Twitter accounts to wage war against former enemies (or friends).  And it seems like most of them are taking aim at Hulk Hogan (@HulkHogan4Real).  First it was Bret Hart (@BretHart), then Honky Tonk Man (@OfficialHTM), and now it's the Ultimate Warrior (@UlitmateWarrior).

I debated to even write about this, but it's been interesting reading the back and forth.  But it's really not so much of a back and forth, as Hogan hasn't really responded to many of the allegations Warrior has made.  On Friday, Warrior is supposed to launch a 55 minute tirade on Hogan.  I watched a clip of the video the other day.  There are accusations of drug abuse and sexual promiscuity with Hogan and his former wife.  In fact, Warrior claims he was the only wrestler to tell Hogan he wouldn't sleep with Linda.

Warrior's other beef with Hogan is the way Hogan talked about "Macho Man" Randy Savage in the days following his death.  Hogan claims the two were making amends after 10 years of not speaking.  Warrior calls that a bogus claim and even blames the Hogans for the split between Savage and Elizabeth years ago.

I have to believe that part of this is bitterness from the Warrior.  Hogan has had some slams back at some of the other comments.  I'm sure there are shades of truth coming from both sides.  According to TMZ at one point Hogan was/is considering filing a lawsuit against the Warrior.  From things I've read from other wrestlers (namely Bret Hart's book, but there are others) both men seem to have inflated egos.  I suppose that is standard in the world of wrestling though.

Lately, I've been so anti-Hogan, I want to "be a Warrior" but his rants are so crazy at times, it's hard to believe everything he's saying.  I've heard comments from some fans that this is all a ruse to do a third installment of Warrior vs. Hogan, this time in TNA.  For the love of God, I hope that is not true.  I don't want to see Hogan back in the ring, ever.  I haven't seen the Warrior in years, so I won't pass judgment on him, yet. 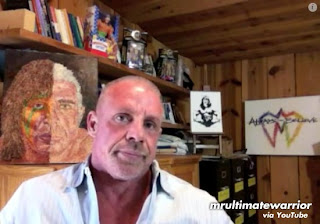 So what do you think?  Should the Warrior and Hogan go one more time?  Or is this a legit feud between two legends?  Yes, I consider the Ultimate Warrior a legend.  And I do think he deserves to be in the WWE Hall of Fame one day too.

Bottom line I guess, I'm not sure how much I care about either of these guys at this point, but if someone were to make a comeback, I'd rather see the Ultimate Warrior.  I feel like he left the business
behind and didn't try to stick around and get his family and friends over.