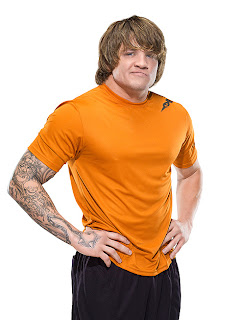 Chad and I are attempting to reach out to wrestlers and learn more about them and share those details with you, our loyal readers.  It's in an effort to get the word out about our blog, and also expose fans to wrestlers who may or may not have a lot of name recognition.  Chad first interviewed Dasher Hatfield from Chikara Pro.  We appreciate him taking the time to participate.

I was able to make contact with Tough Enough contestant Jeremiah Riggs.  I haven't blogged a whole lot about Tough Enough, not sure that I have at all.  But Jeremiah was my pick to win.  After doing research on him for the interview, I learned a few things about him.  I used that info for the basis of some of my questions.

So a big thanks to Jeremiah and his agent Allen.  I appreciate them participating and responding so quickly.  Enjoy.

Note all the photos in this post are courtesy: WWE.


1.  Who is Jeremiah Riggs?  Give us some background on yourself. 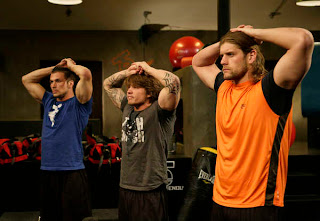 I'm just a boy from Mississippi who works hard and who loves my family. I grew up in Vicksburg, MS. I played football in high school then a little in college before I joined the army. I served in the Ranger battalion and when I got out I started training MMA with Alan Belcher. I decided to take it seriously and moved to California to train with Frank Shamrock and eventually got on The Ultimate Fighter. After the show I went back home to Vicksburg packed up and moved to Illinois to train with Matt Hughes and the HIT Squad. I started training a little at IMA outside Nashville too and got on a win streak and fought for Strikeforce and Bellator. Before going into wrestling I walked away on a five fight win streak.

2.  Which of your reality shows was a bigger risk to your health, Tough Enough, Ultimate Fighter, or Daisy of Love?
I'd have to say Tough Enough. Ultimate Fighter was fun but I only got one fight. It was early in my career and I didn't have much training. When I was on Tough Enough that was a totally different animal. We trained our asses off everyday. They pushed us to see who was really Tough Enough. I was in good shape so I didn't have as hard of a time as some of the others but it was very tough training.

3.  Were you surprised by the pop you received on the live finale of Tough Enough and the response you got on Facebook and Twitter? 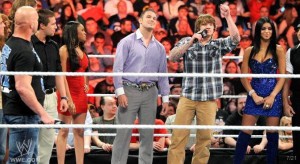 Yes and no. When I was on RAW I knew that I had some fans because I get a lot of messages on Twitter and Facebook but when they all started cheering for me when Bill said my name it was very cool. It was almost surreal. I appreciate the fans recognizing me and it does mean a lot to me. As a poor kid growing up in Mississippi I only dreamed of doing stuff like this. I try not to get a big head. I just love every minute of it.
Twitter is a cool deal. Fans can message me whatever is on their mind and I can message them back. I think it's great. I also think it's important to answer the fans and do what I can to keep up with em. If they think enough of me to write me I owe it to them to try to answer back as many as I can. I know I wouldn't be where I am unless the people cared about me. If they see me on TV and don't care and don't tweet about me my career is in trouble. I've said it before and I'll say it again, if you are a fan of my you are a friend of mine. You are helping me provide for my family. The support means everything to me.
My twitter is @jeremiahriggs

4.  Which star, past or present would you most like to face in the ring and why?
I don't know. I get asked that a lot. I grew up watching Hulk Hogan, Macho Man, Jake the Snake, Rick Rude, Ric Flair, Scott Steiner, Stone Cold, and a lot more. I met a lot of the current stars like John Cena, and the Miz during the show and my times on RAW and they were all very cool and supportive. If I get the call to be a part of the WWE I'll square off with whoever they tell me to. And I'll do it with a smile on my face.

5.  Compare your training with Dutch Mantell and the training you went through on Tough Enough?
Well, that's not really fair to compare the two. Last January my manager and I were in talks with TNA in Nashville and they told me if I was trained they would sign me. We looked around and found Dutch's school which is just outside of Nashville so I signed up. When I was enrolled at his school my MMA career was blowing up. I was in the middle of a five fight win streak and I just got the call to fight for Bellator so I didn't get to train with Dutch like I wanted to because I had to have a training camp. After I won at Bellator I got the call to fight for Strikeforce, they are the #2 MMA promotion and I couldn't tell them no. I wanted to train with Dutch but at the time I couldn't afford to walk away from my opportunites in MMA.
The two classes I went to at Dutch's were fun and I learned a lot. Dutch really focused on conditioning which is the same thing they did on the show. Dutch would have us do hindu squats, and stuff like that which is what we did on the show. I didn't go to many classes but he did teach me the importance of conditioning which helped me on the show immensly. If you are looking for a school in the southeast I definitely recommend you talk to him. Some of my friends from Nashville are now training with him and he has made them into legit pro wrestlers.

6.  Who was your favorite trainer on the show? 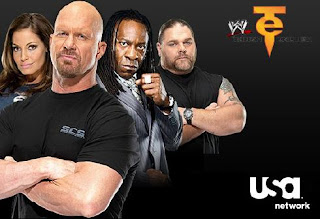 They all were great. Trish is like a big sister. Bill is like a drill sergeant who is there to push you to be your best. Stone Cold is the boss and Booker T was like that uncle who wants to see you succeed. Out of all of them I really got along with Booker the best. That's not a knock against any of the other ones but me and Booker really got along behind the scenes. We talked and cut up all the time and he went way out of his way to let me know he saw something in me. I really like Steve too. I actually talked to him earlier today. I think he and I are a lot alike. We both are country boys who enjoy hunting and we are cut from the same cloth. I'd like to think that he sees a little of me in him and that's why we get along.

7.  Who have been your role models that helped to get you to where you are today?
My dad without a doubt. He's always busted his butt to provide for his family. Right now he's serving in Afghanistan and I can't wait for him to come home.

8.  You are no doubt a tough guy, is there anyone in the WWE you wouldn't want to shoot with?
I don't mean to sound cocky but I feel like I could hold my own with just about anyone because of my MMA training. I've rolled with Matt Hughes, sparred with Robbie Lawler and Brian Foster so I feel I can hang with the best of the best. There are some guys in the WWE who are pretty badass though. I know Jack Swagger is a legit wrestler and I bet he's tough as nails on the ground. Big Show is another guy who I bet would give me problems. He's a big strong dude and if he got on top of me he'd be pretty hard to get off.

9.  Besides yourself, who would you have picked to win Tough Enough and why? 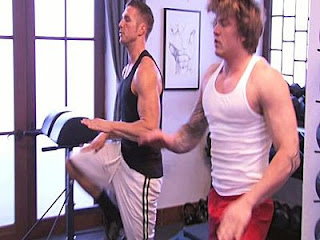 I'd say Luke. He was my best friend in the house and I think he was probably the most polished and ready to go into the WWE. The fans were booing him already so I think he'd be a good fit.

10.  What's next for you?
Right now I'm back in the gym and have been working back home. I'm heading up to Dutch's next week to get some more training in. I feel as long as I keep working hard good things are going to happen. I'll get there. You hadn't seen the last of Jeremiah Riggs.
Thanks again to Jeremiah.  Be sure to like us on Facebook.  Follow us on Twitter.  And subscribe to the YouTube channel!
Posted by Kevin Hunsperger at 5:41 PM