Who Are These "People"? 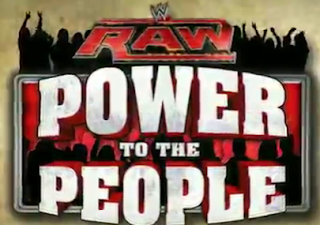 All the photos in this post are from WWE.

Monday night, WWE touted they were giving the booking responsibilities of Raw to us, the fans.  It was dubbed "Power to the People."  After watching the show, my question is, who are these people?  Am I so disconnected from the WWE Universe?  Or was the show manipulated to be what the writers really wanted?  I'm hoping the latter is the case.

The show kicked off with a pretty good (and short) promo by CM Punk.  I'm not a fan of the show opening with a promo, but it's become such a way of life for both WWE and TNA, I've come to expect it.  It was refreshing that it wasn't John Cena in that spot.  Punk wants to be the number one contender, says he's earned the spot with wins over Rey Mysterio and Cena.  I agree with Punk.  The Raw GM says he's gotta beat Alberto Del Rio and Rey in a triple threat match later in the show... 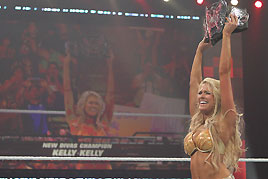 Kelly Kelly gets picked by fans to take on whichever Bella twin is the Divas champion.  Kel gets the win and her first run as champ.  I like Kelly, but would have rather seen Beth Phoenix get the match and the title. When is the WWE going to start using the women who work best in the ring (Natalya, Beth, and Gail Kim)? I know Kelly Kelly is over, and the vote for her to get the match was likely legit.  I have no problem with that decision by "the people."

But when it comes to the Evan Bourne vs. Mason Ryan match, I scratched my head.  First, I was surprised that Evan Bourne was even the focus of this match.  A couple of wins over Jack Swagger, and it seems he's on the rise again.  But whatever momentum he gained, was plucked away when Batista Jr. got the win.  Here's my question, what WWE fan voted for this match?  I would think a Sin Cara-Evan Bourne match would be a WRESTLING fans dream come true.  Maybe that's the problem... this is an entertainment show right.   Now, I'm suspicious of the whole "voting" system... 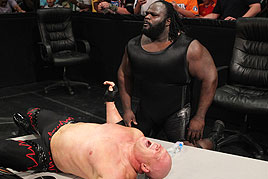 Kane and Mark Henry had an arm wrestling match.  Or at least they started too.  I'm not sure, but I think at one point Michael Cole referred to Kane and Henry as former tag team partners.  Did he really say that or did I mishear him?  Were they ever partners?  Anyway this ended with a beatdown on Kane.  I seriously wish the E would make a decision on Henry.  He's been around 15+ years and goes through these peak and valley pushes along with face and heel turns.  It appears they're trying to make him a monster again...

The Really, Riley, Randy, Jimmy exchange between R-Truth, Christian, and the Miz was funny for about 2 seconds, then it got annoying.  Why was SmackDown general manager Teddy Long on Raw making a match? Four of the six competitors are from Raw too.  Wouldn't the Raw GM step in (or email in) and either give Long that authority or stop the match from happening.  Just sayin'... 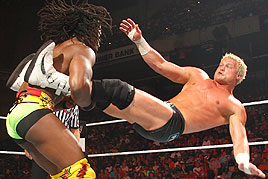 So far, I'll say the Kofi Kingston-Dolph Ziggler match has been the best.  But why in the world would you have a fall take place during the commercial break?  I know I wasn't the only one to comment on that, but at least they showed the replay.  I've mentioned before I really like both of these guys.  I wished Kofi would have gotten a better push back during his feud with Randy Orton a couple years back.  Dolph to me should get a solid run as U.S. champ.  Maybe feud with John Morrison when he returns and groom both (all 3) of these guys as world title contenders.  But I hate when they end a best of 3 falls match with a DQ. I hated it when it happened in 1987 with the British Bulldogs against the Hart Foundation and I hated it Monday night. 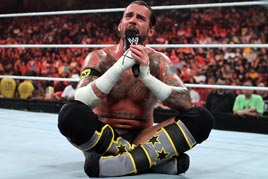 The Triple Threat falls count anywhere match was pretty good too.  Del Rio is growing on me.  I really thought he was going to win this one.  Punk gets the victory, then announces his contract with WWE is up on July 18th, the day after Money in the Bank.  He promises he will leave the company as the WWE champion.  This got a lot of buzz online.  I still say Punk is working here.  I don't believe he'll win the title, and I don't believe he's going to leave the company.  At least not permanently.  But he may take some time away and be written off TV. I just don't see him leaving for good.  I think at first he was not planning to resign and then all the internet talk started.  In my opinion, the WWE is using that online speculation to help fuel buyrates for the pay per view.  Hardcore Punk fans will buy MITB to see his "last" match with the WWE.  Personally, I'd enjoy another title run for Punk.  But reading speculation that SummerSlam will be Cena vs. Del Rio, I'm not going to get my hopes up.

I was happy to see Daniel Bryan pick up a win.  I also like the fact that it appears Cody Rhodes and Ted DiBiase are working together again.  I'm hoping this is another step toward reforming Priceless. 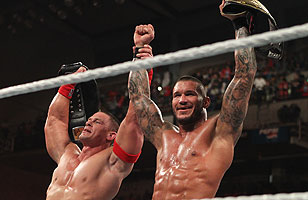 I'll be honest, I fast forwarded through the main event, because I saw Super Cena and Boy Orton won the match.  Me telling you I'm sick of finishes like this is as repetitive as the matches themselves...

I'd give the overall show a B though if I were grading it.