The news of Vince Russo leaving TNA is a few days old, I know. I was waiting for more solid information to be released before writing. My123Cents is more of a commentary on wrestling blog than a news blog.  Since Kevin and I have no insider access to WWE or TNA, any news we “report” comes from other more legitimate wrestling web pages. Because of that, we prefer to offer opinions on what’s happening in the wrestling world instead of breaking stories that you can read on any other site. If we simply repeat what we read elsewhere, what’s the point of you reading our blog instead of going directly to the sources we’re copying?  That’s why we do series like Kevin’s on-going Black History Month spotlight or the “What If” posts. So today, I’m not going to simply comment on Russo’s departure and speculate what may have happened behind the scenes. Rather, I’m going to give my take on how his departure is a microcosm of what’s plagued TNA in a viewer’s opinion since TNA began.
I’m no fan of Vince Russo’s. While I feel he was part of the catalyst that triggered the Attitude Era, I’ve felt he’s a legend in his own mind. The opinion I formed of him from reading interviews and his book is he’s a man who is above criticism and fails to accept his limitations when it comes to creative ideas. I have often wondered why Vince was hired by TNA, and how he managed to stay employed for nearly ten years. It’s no secret Vince and Jeff Jarrett are good friends and without Russo going to bat for Double J in both the WWF and WCW, Jarrett probably wouldn’t have become the main event star he was during WCW’s final years. When Jarrett decided to start TNA, it was understandable he’d enlist an old friend to help create an identity for the new company.
After Dixie Carter took over control of TNA, somehow she became a supporter of Vince and has defended him from critics going so far as telling the staff, “the next time I hear a Fire Russo chant, someone else is getting fired.”  (Paraphrased from her YouShoot interview)
While on one hand I commend Dixie for being loyal to a fault to an employee, her naivety shows a major problem with TNA. Instead of looking at a problem and making changes to fix the problem, TNA has chugged along the same path almost saying to fans, your opinions don’t matter. 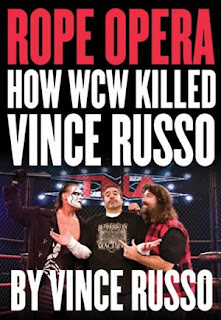 In the same video clip, Dixie stated Vince has a polarizing reputation and as a wrestling company that’s what you want in a member of your team. If she honestly believes that and doesn’t understand the difference between a wrestler who fans love or hate, thus evoking a reaction from the crowd, and a writer who fans hate more than they like, then clearly Dixie needs to not be in charge of the company.  Vince Russo is the M. Night Shyamalan of the wrestling world. Vince had a few months of hits because what he was doing was relatively new and different at the time. After that initial success he has relied on the same characters, gimmicks and swerves much like Shyamalan has relied on twists in his film’s plots. The problem is in both cases, the stories being told aren’t good and the swerves and twists are there simply to be there and make little to no sense.  They’re there because they’re trademarks of the writers, and the writers feel they have to be there instead of creating a logical story with a beginning, middle and definite ending. If you’re interested in looking at numerous examples of poor storytelling in TNA, creators of this link have compiled a year by year listing of senseless turns, angles that disappeared and other nonsense over TNA’s first nine years.
Now, is all the bad storytelling solely because of Vince Russo? I don’t know. Maybe he is a better writer than he’s given credit for and all the horribleness is the result of his scripts being tweaked with by management. Either way, my argument here is if TNA truly wants to succeed, Vince Russo should have been shown the door a long time ago.

A company can fail or succeed based on the reputation of the people involved. Vince Russo is probably the most hated person associated with wrestling. That hatred, despite what Dixie may claim, doesn’t entice fans to watch Impact. It has the opposite effect. Over the last nine years, when fans complained about Russo, instead of trying to understand why fans were upset, TNA stuck their fingers in their ears and screamed LA LA LA LA.
With Russo now being gone from the company does that mean TNA will become the best wrestling company on the planet? No.  While TNA has reportedly been on an upswing in terms of storytelling, there are still factors that need to be addressed.  Along with Russo, the hiring of Eric Bischoff and Hulk Hogan brought about some more fan backlash due to the duos own reputation inside the wrestling world.
In their time with TNA, there has been very little benefit in terms of increased ratings or show attendance.  Whenever Hulk Hogan is doing publicity for any of his other business ventures, rarely if ever does he mention TNA unless directly asked. A few times when he’s been asked about what’s going on in TNA, Hogan has given away upcoming pay per view results. Not exactly a good business strategy. In addition to Impact, Eric Bischoff has a few other TV shows in the works with his BHE company.  If TNA were a bigger company, Bischoff being distracted by other business ventures may not be a big deal, but with TNA having had very little noticeable growth in then years, if it were my company, I’d want someone who was fully dedicated to improving and growing TNA. Not to discredit Eric, as I’m sure he’s a good multi-tasker, simply saying TNA should be staffed by people who are 100 percent committed to TNA.
What does the future hold for TNA? Is the departure of Vince Russo the first step in a positive direction? Time will tell.  Fans on our Facebook page commented that Russo’s being off the creative team would increase their interest in watching TNA. If TNA continues to focus on homegrown talent, put an emphasis of titles and learn to have main events that don’t include ref bumps, I still believe they can become a major player in the wrestling world.
Do you feel Vince Russo’s departure will have a positive or negative effect on how entertaining Impact is in the coming weeks? Share your thoughts on our Facebook page.
Posted by Kevin Hunsperger at 2:23 PM