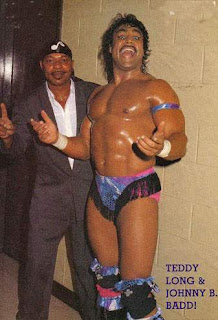 I've been watching wrestling for so long that I remember when Teddy Long was merely a referee in the old NWA (National Wrestling Alliance that is).  But  a couple of years after the WWF had turned referee Danny Davis into a heel, the NWA decided to try it with Long.  But unlike Davis, Long became a heel manager.

His first charge would be Norman the Lunatic.  Long soon added the Skyscapers to his stable too.  Doom, the One Man Gang, and Johnny B. Badd were just a few of the men he managed.  At one point during his stint in WCW, he turned face and managed jobbers like Jim Powers and Joey Maggs.  In 1999, he headed to the WWF, but returned to his refereeing roots.

About three years into his run with the company, he started the heel managing gimmick again.  D'Lo Brown, Mark Henry, Rodney Mack, and Jazz were among the wrestlers he guided through the mat wars.  In 2004 (I can't believe it's been that long ago) Long became the General Manager of SmackDown! after Kurt Angle was "fired" from the role.  He turned face and worked to even the odds for the other faces in the company with the decisions he made each week.

(Yes, the Undertaker is in the video below, when he was "Mean" Mark)

Through the years, Long would be involved in different angles, including one that saw him have a heart attack on his wedding day to Diva Kristal Marshall (remember, wrestling weddings NEVER go as planned)  While he was offer recovering, Marshall and her real life boyfriend Bobby Lashley left the company.  In Long's absence, Vicky Guerrera was named the GM of SmackDown! and when he returned from his heart attack/coma, he was placed as her assistant.

Things didn't work out so well for Long, and he "quit" before being reassigned to ECW.  Eventually, he'd go back to SmackDown! where he continues to serve as the GM.  But with the recent developments on Elimination Chamber, it appears that the WWE is looking to consolidate the role of GM between Raw's John Laurinaitis and Long.  Since Johnny Boy seems to be the focal point right now of story lines, I can't imagine Teddy will be around for (pardon me) very long.

I don't think getting rid of him as GM would necessarily be a bad thing, as I'd like to see him return to his role of a manager.  There is clearly a void in that position in wrestling today.  Since he has already been a successful manager in the past, I think it would be great to see him doing it again.  There's is plenty of young talent on both rosters who could benefit by someone with Long's knowledge.

Perhaps this could be the return to an endeavor that once made Long a household name among wrestling fans.  Only time will tell, but please let's hope there's no "wrestling" matches planned between Long and Laurinaitis anytime soon.
Posted by Kevin Hunsperger at 3:15 PM