Nobody's Perfect, But Curt was Close 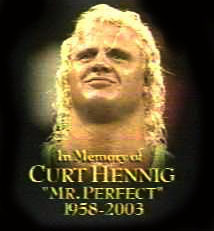 February 10, 2012 marks the nine year anniversary of the death of "Mr. Perfect" Curt Hennig.  It's hard to believe he's been gone that long already.  While the manner surrounding his death is less than perfect, the character he played in the ring was pretty damn close to it.

My first memories of Curt Hennig go back to the AWA days, in the early to mid 80's.  I know he started off working mostly as enhancement talent in the WWF early in his career.  But I didn't start watching wrestling full-time until 1984, and he had just come to the AWA at that point.


He did a lot of work on the singles scene, but then was paired up with Scott Hall and won the AWA tag team titles.  Curt was good back then, but he seemed to lack any kind of character development.  I think the AWA kept him as "the son of Larry Hennig" and it kinda hurt him overall.  He was the plain vanilla baby face.  (Kinda reminded me of a more talented version of Greg Gagne)  Then the AWA turned him heel and put the world title on him.  That added a new dimension to him and showed that he was more than a guy who could wrestle.

I think the world really took notice of him after he lost the title to Jerry "The King" Lawler and headed to the WWF.  But he dropped his real name and became known as Mr. Perfect.  He was introduced to a new fan base through a series of vignettes that saw him doing near impossible feats in the world of sports.  Backward swooshes in basketball, the perfect dive, and sinking a hole in one.  For a while he went on a streak of beating mid carders and jobbers before picking up the Genius as his manager (that was Lanny Poffo for those who don't remember)  I thought it was an odd pairing as I never got into the Genius as a manager.  Anyway, he challenged Hulk Hogan in late 1989 for the WWF title, and in hindsight, I wish he would have won the title back then.  I was a Hulkamanic in those days and wanted to see him keep the title.  But now that more than two decades have passed, I've come to appreciate the other players in the WWF, including Mr. Perfect. 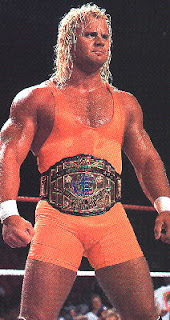 His biggest success in the WWF (and maybe in all of wrestling) came when he won the Intercontinental title.  This of course happened after he beat Tito Santana in a tournament when the Ultimate Warrior surrendered the title because he won the World title.  Perfect was then paired up with manager Bobby Heenan, and I think the relationship was, well perfect.  I had hoped that would have lead to a Rick Rude face turn and a feud with Curt for the the IC title, but Rude left the company too soon.

Perfect did drop to the title to one of my all time favorites, Kerry Von Erich, but quickly regained it and held it for quite some time.  He faced the challenges of Von Erich, Big Bossman, and Davey Boy Smith before finally dropping the belt to Bret Hart at SummerSlam 91.  Little did I know then, Curt was hurt badly and needed time off.  In my markish mind then I thought there was no way a tag team mainstay would beat someone like Perfect for the title.  In fact, I lost 5 bucks to my college roommate as a result of that match.  He dropped his new manager "The Coach" John Tolos after that match and quickly left TV to tend to his injuries.


He came back later, this time as an advisor to Ric Flair.  Again, I felt like this was the perfect role/relationship.  But eventually he'd turn face and end up beating Flair, sending him back to WCW.  Curt had an outstanding match with Bret again at the 93 King of the Ring and had been a top contender to Shawn Michaels IC title that year.  He never won the gold back, but did end up turning heel again and mentored a young Triple H in his quest for the IC title.  Then in late 96, he did what all the top WWF guys were doing and jumped ship to WCW. 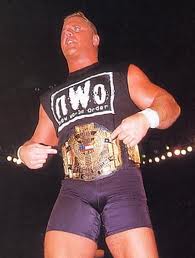 Of course he had to drop the Mr. Perfect moniker there.  His run there was fine, some of the things I remember was his run as U.S. champion, his time as a Four Horsemen, and the nWo.  And who could forget his song "Rap is Crap."

He would eventually have one more brief run with WWE, but it didn't last.  Sadly he died from an apparent cocaine overdose.  A tragic end to such a talented life.  Curt has been enshrined in the WWE Hall of Fame and has produced a legacy in Michael McGillicutty.  I hope the WWE gives this kid a chance to shine at some point, but only time will tell.

Like I mentioned earlier, my appreciation for Curt Hennig has grown overtime.  I was a fan of Mr. Perfect in the WWF, but looking back on his career makes me miss him that much more today.  In today's wrestling environment, he would have definitely been a multi-time world champion.  He's one of those guys I've blogged about who SHOULD have won the gold in the WWF/E.  What are your favorite memories of Mr. Perfect?  Share them here or on Facebook, Twitter, or YouTube.
Posted by Kevin Hunsperger at 1:45 PM