Growing up in the 80's and becoming addicted to wrestling, naturally I was a fan of the Junkyard Dog.  He was a big man, but always seemed to be having a blast in the ring.  My first house show was in 1984, and JYD beat "Cowboy" Bob Orton by disqualification after Roddy Piper interfered.

Before he arrived in the WWF though, the Dog enjoyed much success in the Mid South area.  In fact, I believe it was Cowboy Bill Watts who gave Sylvester Ritter the Junkyard Dog name.  He also worked in Stu Hart's Stampede region.  I also remember prior his arrival in the WWF in 1984, he wrestled briefly for World Class Championship Wrestling.  One of the classic contests from that era was his head butt battle with the deranged Missing Link.

But he wasn't always the fun loving baby face we came to idolize.  Dog got his start as a heel.  It didn't take long for him to get over with the fans though.  After picking up a victory, JYD would invite young fans into the ring to dance in celebration.  We never sat close enough to the ringside area to do that, but I always dreamed of getting in there with him one day.

The Dog's character fit right in with the PG mentality of the WWF back then.  He was on tshirts (I owned one), action figures (had one of those too, still do), and was a character in Hulk Hogan's Rock n Wrestling cartoon.  (Fun fact, James Avery who played Uncle Phil on the Fresh Prince of Bell Air was the voice of JYD in that series)  JYD was also a performer on the Wrestling Album, singing his new theme song "Grab Them Cakes."  I still play it from time to time in my iPod.

His biggest moment in the WWF came at the first Wrestlemania.  JYD challenged Greg "the Hammer" Valentine for the Intercontinental title.  Valentine cheated and put his feet on the ropes to get the pin.  However, former champ Tito Santana came down to protest and the ref restarted the match.  Valentine and his manager Jimmy Hart high tailed it out of the ring and the champion was counted out.  I was so bummed.  I watched Wrestlemania via closed circuit television that night and besides Barry Windham and Mike Rotunda losing the tag team titles, that was the disappointment of the night.


Shortly after the DQ win over Valentine at Wrestlemania, JYD was booked in the Wrestling Classic tournament.  I think it was a direct to video release project for the WWF, which saw the Dog win the 16 man tourney.  He scored a win over the Iron Sheik and Moondog Spot before facing "Macho Man" Randy Savage in the finals.  Dog won that match by count out.  A cheap way to end the tournament, but hey, he did win it all.

I can't remember what year it was, but it was early on in the Saturday Night's Main Event franchise and Dog had been attacked by someone on the show.  He was taken backstage and everyone thought he was down and out, but he later charged the ring with his head wrapped up to defend his friend.  I want to say it was a tag team match with Hulk Hogan against the Funks, but I'm not sure.  In addition to seeing it on TV, I also saw that match live in St. Louis at a house show.

JYD competed against Terry and Dory Funk, Harley Race, and Ron Bass.  I think after that semi push he experienced in 1985, things started to go down hill a bit for him. He was on the losing end of his feud with Funk and then at Wrestlemania III he jobbed to Harley Race, which is nothing to be ashamed of, but the match was over before it started.  He was then supposed to bow to "the King", but instead punched him out and took his crown and robe.  Another classic JYD moment.

By 1988, he was on his way out.  JYD was in the final 3 of the Wrestlemania IV battle royal and lost by disqualification to Rick Rude at the first SummerSlam.  He was gone from the company by Survivor Series.  Dog went back to Stampede and eventually made his way to WCW, where if memory serves me, he scored a handful of pin falls over Ric Flair at house shows.  I can't remember if Flair was still champ then or if he'd dropped the belt to Sting already.  JYD did hold the 6 man tag team titles with Tommy Rich and Ricky Morton in 1991, then he went to USWA to beat Eddie Gilbert for the unified heavyweight title there. 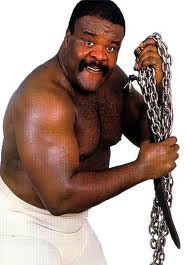 In 1998, JYD's life was cut short in a traffic crash.  I remember reading out it online and being devastated by the news.  One of my childhood heroes was gone forever. However, in 2004 the WWE inducted him into the Hall of Fame.  So even though Junkyard Dog is not here, he's legacy is and always will be.

He may have never been the champ, but Junkyard Dog was truly one of the all time greats.  May he rest in peace.
Posted by Kevin Hunsperger at 3:14 PM