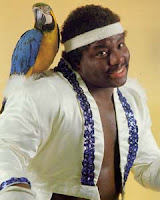 When I was a kid, I remember the flash and pizzaz associated with "the Birdman" Koko B. Ware.  He was probably the most popular lower mid card guy in the WWF in the late 80's.  But before Koko landed in the WWF, he was a nasty heel in the Midsouth, Memphis, and World Class regions.

The first time I remember Koko Ware (there was no B) he was wrestling with Norvell Austin as the PYTs (Pretty Young Things)  The duo came to the ring sporting red Michael Jackson jackets.  But unlike their tag team name, they were far from pretty.  They were heels and wrestled the likes of the Fantastics, the Fabulous Ones, and the Youngbloods.  They held several regional tag team titles back then.

Koko eventually flew the coop and headed north to the WWF.  In 1986, he added the B. and a bird to his character.  Frankie the macaw became as popular as Koko himself.  Despite losing in his debut on Superstars (he and Paul Roma were beaten by the Hart Foundation) Koko was loved by the fans.  I remember watching the match and the reaction fans gave him.  After the loss, he dropkicked both Jim Neidhart and Bret Hart, much to the delight of the crowd.

Koko never really climbed the ranks, even though he was with the WWF for many years.  He was clearly a jobber to the stars, losing to Butch Reed at Wrestlemania 3 and was pinned by Bobby Heenan in a six man tag team match at Wrestlemania 4.  The British Bulldogs and the Islanders were also involved.  But like I said, Koko was over with the crowd.  His singing talent landed him the title song on the second wrestling album: Piledriver.  In 1992, High Energy was born, a tag team with Owen Hart.  The two wore some really outrageous gear, but never really achieved any success in the tag team ranks.

It really wasn't until Koko headed to USWA (still part of the WWF too) and won the heavyweight title there.  Looking back it seems like Vince sent a lot of his guys to USWA who he wasn't really using in the WWF at the time.  Koko beat Kamala for the that championship.  But neither man held any gold in the WWF.

Koko has since retired from the wrestling business, but was inducted into the WWE Hall of Fame in 2009.  It was a surprising decision I think to many fans, as some (myself included) have questioned why the likes Randy Savage, Rick Rude, and Jake Roberts hadn't been inducted yet.  But the WWE Hall of Fame is unique to say the least.  I'm not saying Koko doesn't have a spot in there, as he provided years of entertainment for wrestling fans.  Kids loved him, adults loved him too.
Posted by Kevin Hunsperger at 2:01 PM