This blog has a duel purpose.  Regular readers know that I recently became the play by play guy for All American Pro Wrestling, a group based in southern Illinois.  Even if you don't live in this area, I encourage you to keep reading, this post isn't just about AAPW.

The folks there have been working hard for the last 5 years.  That hard work has paid off, and now AAPW has landed a television show.  Collision debuts September 3 on WSIL TV at noon.

Working on the shows has made me realize just how hard it is to put together a wrestling program.  I have a very minor role in all this, the show's executive producer, (and my cohort at the announce table) Chris Hagstrom has done a tremendous job putting all this together.

There are countless hours of set up and tear down before and after each taping.  Then there's the editing and revoicing if necessary.  He adds in the commercial spots and gets everything sent off to the TV station to make sure it's ready for the big debut.  I have seen the show in raw form 2 or 3 times now.  I can't wait to see the finished product. 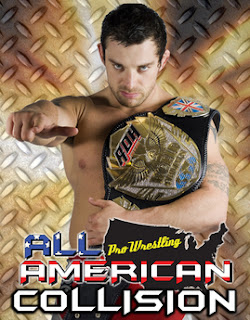 One more plug, and then I'll get to my original point.  On Sunday, August 28 we're taping two more episodes of Collision at Black Diamond Harley Davidson in Marion, Illinois.  Belltime is 2 p.m.  Besides the usual suspects like Shane Rich, "Golden Boy" Greg Anthony, and Curly; the reigning Ring of Honor champion Davey Richards will also be on hand.  I'm looking forward to meeting him and hope to talk with him for the My 1-2-3 Cents YouTube channel.

I think it's great that local wrestling is finally getting some time on television.  If you live in a community that has an independent wrestling organization, I would encourage you to check it out.  The men and women who are in the ring and behind the scenes bust their asses to keep the fans entertained.

Admittedly these wrestlers aren't on the same level as the stars you'll see on Mondays, Thursdays, or Fridays.  But you never know who you'll end up seeing on Raw, SmackDown!, or Impact one day.

The rigors they put themselves through for very little pay and maybe even less glory should be commended.  I'm not just talking about AAPW talent.  I'm talking all the indy stars out there.  Here's a fun fact, I worked a couple of IWA: Midsouth shows several years back that featured Matt Sydal.  If the name isn't familiar, he's the current coholder of the WWE tag team titles, Evan Bourne.  I wish back then I would have paid more attention to his work.  You just never know where some of these guys are going to end up.

Supporting local wrestling also supports your community.  You're putting money in these wrestlers' pockets.  Many of them probably live and work in your town, or nearby.  They spend that money they make at stores, restaurants, and other businesses where you live.  So going to a wrestling show keeps you entertained and helps the local economy.

Southern Illinois readers, hope to see you Sunday.  And don't forget to tune in to WSIL TV in September.  It's going to be awesome. (sorry Miz)

Posted by Kevin Hunsperger at 3:41 PM