Growing up in the 80's, I'm probably a little biased when I say that was the greatest decade ever.  Movies, TV shows, and music.  It was all better back then.  It also seemed that wrestling was even better back then. I'm trying to decide if that's because I was a kid and not smart to the things that were happening back stage and that curtain hadn't been pulled back yet, or if it's because things really were better. 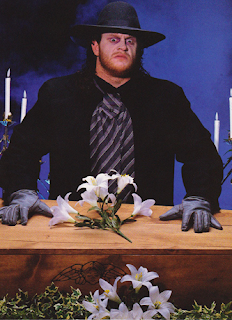 Wrestling in the 80's, especially in the WWF was full of crazy characters.  It was like a real life cartoon.  Heck, at one point, wrestling was a cartoon.  (Hulk Hogan's Rock 'n Wrestling show).  The WWF roster was full of over the top characters.  This also carried over into the early 90's.  It seemed like there were no "real people" involved.  Or maybe they were real guys, who took their job outside the ring way too seriously. Everyone seemed to have a gimmick.  Brutus Beefcake was a barber.  Ray Traylor was a prison guard.  Kevin Kelly was a prison.  There was a model, a Mountie, a repo man, a tax man, and even an undertaker.

Admittedly, the Undertaker's gimmick has evolved a lot over the last 21 years.  He doesn't stuff his victims in a coffin or a body bag anymore.  But the gimmick is still alive (at least for now).

The mid 90's things started to change up.  The cartoonish image started to fade a bit (not withstanding the likes of the Blue Blazer and Doink the Clown), but the focus seemed to hit more of the "real" guy image.  Bret Hart, Shawn Michaels, and Diesel started their ascension into the spot light.  There were still some silly career gimmicks like the forgettable Goon, TL Plopper, and Duke "the Dumpster" Droese.

It really wasn't until the Attitude Era and the Monday Night Wars that we started seeing more of these real guys emerging.  While they still had some sort of gimmick to help get them over (the Nation of Domination, DX, and Stone Cold Steve Austin) these characters broke the mold of the silly gimmicks of guys carrying hedge clippers, or snakes, or pet birds to the ring.

Fast forward even further now and most everyone in the WWE is more of a "real guy."  Just off the top of my head, I can't think of any really gimmicky guys left with the exception of the rarely used Goldust and Hornswoggle.  Maybe that's part of the problem with today's product.  There's too much realism involved.  It's hard to suspend your sense of reality.

I think that's what I liked about wrestling in the 80's.  Guys like the Ultimate Warrior, Kamala, and the Honky Tonk Man were all larger than life.  The silliness made wrestling fun.  I miss that.  And don't get me wrong, I'm not suggesting a total step back in time to the crazy, silly, goofy gimmicks.  But I wouldn't be upset if they tired a few just to see if it sticks.

Posted by Kevin Hunsperger at 1:15 PM