This was going to be a purely speculative write up about the nWo reforming, but then I actually ran across this story on WWE's website.  So now I'm thinking maybe there will be no rebirth, but I'm still going to write about it.

The only basis I have for thinking that the WWE might be flirting with the idea of the umpteenth version of the once popular group is the fact that Kevin Nash is indeed back on camera.

They have also posted a bunch of old nWo videos on the WWE website, as well as on YouTube.  Plus, add in Nash coming in to attack CM Punk on Raw after the Miz and R Truth did the dirty work.  It makes me go "Hmmmm..."  Could this new version of the New World Order involve the two victims of "WWE conspirators"?  It's been reported that Triple H is in favor of putting the tag team division back together.  That could also include the building of the wrestling factions.

Personally, I'm not in favor of recreating history.  It was lightning in a bottle 15 years ago.  The original concept was groundbreaking for sure and it did change the face of wrestling.  But it literally only took a few months for Eric Bischoff and the powers that be at WCW to water it down and ultimately destroy the idea. When they added IRS and Vincent to the group, it was way past being over and done.  (No offense to Mike Rotunda or Virgil)

I'm cautious about the formation of any kind of super group in the WWE.  Look at what happened to the Nexus, the New Nexus, the Corre, and the Straight Edge Society in the last 18 months.  They all cease to exist.  It's unfortunate, because the wrestling stable is something that I miss from back in the day along with tag teams and managers.  But I'm all for them trying something different.  It appears Vickie Guerrero may be on the verge of starting a new group too.  Unless Dolph Ziggler ends up leaving and feuding with her and Jack Swagger... 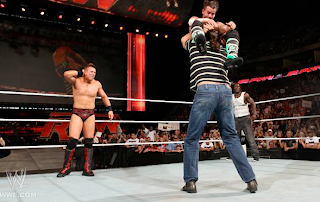 I think the Miz and R Truth make a good pairing, however I don't want to see that nWo flag waving again.  The group died in 2002, I thought once and for all.  I know there are fans out there who are excited about the prospect.  They cheered when Nash's nWo theme hit on Raw.  I however, am not one of them.  Maybe I'm getting old.  There are kids on my lawn I must go yell at.

Oh, before I go, check out my thoughts on the Super Raw & Super SmackDown! concept.