SummerSlam Rewind: Not the Face 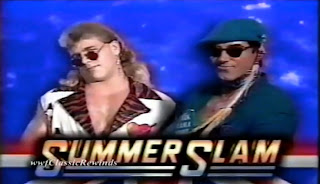 A forgotten contest on that card featured an up and coming Shawn Michaels vs. "The Model" Rick Martel.  Both men were heels (maybe this match was made because of the two face vs. face matches on the card too) and had a stipulation that they couldn't punch one another in the face.  That may sound a bit ridiculous, but technically that stip was in line with the rules of wrestling.  Wrestlers aren't supposed to throw punches at one another.

I just rediscovered this match on YouTube.  And while I thought the ending was lame with Sherri Martel passing out and both men fighting to a double count-out, the match itself was pretty good.  Looking back on the Model's time in the WWF, I think he was one of the most overlooked heels in the company.  He's one of those guys who today would have had a run as the world champion.  Back then, they didn't trade the title off as often.

This match was also a good one because Shawn had just turned heel and was climbing the ladder of success.  I don't know if it was already determined then or not, but just a few short months later, HBK would defeat Davey Boy for the IC title.  I remember nearly 20 years ago when this SummerSlam match was signed, I assumed that Shawn would go over, simply based on the fact that he seemed to be in line for a push.  He was the new heel on the scene.  The double count-out was a surprise.  I don't think it really helped accomplish much of getting either guy over any more.

But the match was entertaining and it was booked with a purpose.  Each man was vain and wanted to win the affections of Sherri. While I'm not crazy about a lot of silly gimmicks, the pretty boy and the model both pulled the characters off perfectly.  They were still real guys, but with ramped up, obnoxious personalities.  I think that's something that is missing from today's product.  There are two many "real" guys on the show.  But this is a case for another time.