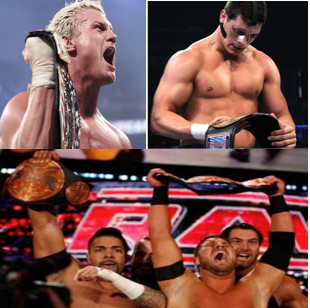 By Kevin Hunsperger
@kevinhunsperger on Twitter
Photos are from WWE.com


Regular readers of this blog know that I (we) vent a lot about the lack of focus on the champions in WWE. Most recently on the Summer Slam pay per view.  I think many still consider this one of "the big 4" events on the WWE PPV calendar.  But once again there was no tag team title match.  No Intercontinental title match.  And no U.S. title match.  Not only were there no title matches, but fans didn't see Dolph Ziggler, Cody Rhodes, David Otunga, or Michael McGillicutty that night.

This year, we didn't even see any of these champions on the card. But Dolph Ziggler defended the U.S. title in a dark match against Alex Riley.  I'm curious why the WWE didn't save the Cody Rhodes-Ezekiel Jackson IC match for Summer Slam instead of having it two nights earlier on SmackDown!  And the tag team division is in the toilet right now, so I guess it's better there was no tag team title match.

You have to go back to Summer Slam 2009 for the last time the tag team titles were defended on that PPV. It was the Big Show and Chris Jericho defeating Cryme Tyme.  And get this, the last time the U.S. title was defended at a Summer Slam, it was 2005.  Chris Benoit beat Orlando Jordan.  Call me crazy, or old school, but in my opinion pay per views should feature title matches.  All the champions need to be defending their gold.  And when's the last time there was a scheduled and announced tag team title match on any PPV?  Not just one that was announced that night. 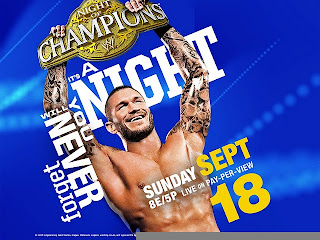 This likely goes back to the problem we've talked about before.  The focus seems to only be a handful of superstars.  That leaves guys like Cody Rhodes, Wade Barrett, and Kofi Kingston as after thoughts.  Then guys like Zack Ryder, Evan Bourne, and Jack Swagger who are lucky to appear on a show at all.  While I don't claim to have all the answers, I think it's important to include your champions on the show, whether it's a Raw, SmackDown!, or PPV (especially if it's one of the "big 4").  Night of Champions is around the corner, let's hope they're ALL a part of the show, and we get some buildup leading their defenses.

Posted by Kevin Hunsperger at 3:01 PM