By Kevin Hunsperger
@kevinhunsperger on Twitter
All photos are courtesy WWE


So the WWE has new tag team champions in Kofi Kingston and Evan Bourne.  Someone please correct me if I'm wrong, but wasn't last week the first time these two teamed up?  Maybe they've had some other matches over time, but it seems like this pairing is just a couple of guys that creative has nothing for, so let's put them together.

Now please, don't get me wrong.  I am a big fan of each of these guys individually.  And honestly, I'm probably passing judgment too soon on how they'll gel as a tag team.  My frustrations with the tag team division or lack there of have been well documented on this blog and on YouTube.

That video is from about 9 months ago.  I still maintain the WWE has done very little to breath any life in the tag team ranks.  This makeshift team of Kingston and Bourne is a start in the right direction.  But in my opinion, the first thing they need to change is their separate entrances.  I never understood why any team enters the ring as individuals. 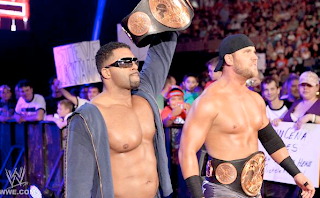 I really felt like Michael McGillicutty and David Otunga were finally coming into their own.  I really hope the WWE doesn't do the usual splitting of the former champs like they've done so many times before.  If you count Otunga and McGillicutty (they need a catchy name), and Kofi and Evan (again, another name), the Usos, and sometimes Santino and Zack Ryder are there any other regular tag teams on the roster?  Of course there's been speculation that the Kings of Wrestling (Claudio Castagnoli and Chris Hero) are WWE bound.  I hope this is true and I hope they keep this unit together.

If they are in fact bringing in the Kings, this could actually launch a rebirth of the tag team division.  I think Kofi and Evan would have a better feud with the KOW.  But I'm probably putting the cart way before the horse here.  Remember when the Legion of Doom arrived in WWF in 1990?  We all wanted to see them battle Demolition for the tag team titles (at least I did) and instead they ended up helping the Bushwhackers against the Natural Disasters while Demolition dropped the tag team titles to the Hart Foundation and Ax was soon out of the company.

Back then though there were plenty of tag teams that they could have different programs with different teams going on at the same time.  Now it's a week to week thing and sometimes we go several weeks without even seeing the tag team champions. 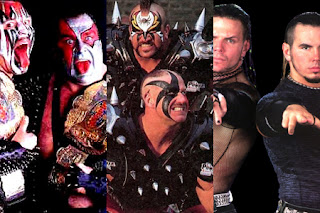 I know tag team wrestling will likely never boom like it did back in the 80's and 90's.  Teams like Demolition, the Hart Foundation, Rockers, Brain Busters, British Bulldogs, Killer Bees, Road Warriors, Steiners, etc.  I really think the attitude era and the Monday Night Wars lead to the demise of the tag team at least in WWE.

This blog is a lot of wishful thinking, but I'm hopeful this time that we may see something happening on the tag team scene.  I'm still disappointed they let David Hart Smith go and a Hart Dynasty reunion is no where on the horizon.  Again, I think the WWE needs to let some of these teams simmer for a bit.  Don't split them up after a run as champions.  Help keep the tradition of tag team wrestling alive.