Legen (What for It) Dary

Regular readers know that I'm a fool for old school.  But I'm also in favor of pushing new and fresh talent.  It's a conundrum sometimes.  While I'm not a fan of watching Stone Cold Steve Austin stun up and comers or the Rock deliver a Rock Bottom to someone who is climbing the ladder to the main event, I understand why the WWE does it.  I understand it, but I don't agree with it.  As Chad pointed out in a previous post, we never saw guys from the 80's coming in during the Attitude Era and delivering their finishers on the Rock, Stone Cold, or the Undertaker.

That being said, I do think there is a place for the legends and Hall of Famers of the wrestling world.  If the WWE ever launches that much anticipated cable/satellite network, I think there could be a show dedicated to them, as active performers.  Wait, hear me out. 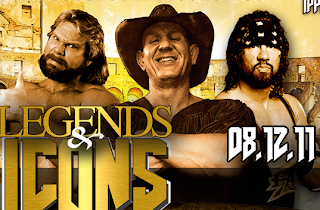 The recent legends event at the Gathering of the Juggalos had me very interested in attending the show.  The likes of Roddy Piper, Terry Funk, Mick Foley, and Hacksaw Jim Duggan all on the same card made me kinda mark out a bit.  I know the wrestling quality isn't what it was 20 years ago, but I still enjoy seeing these guys in the ring.

I think the WWE could create a Legends show, make it an hour long.  Do a couple, three matches.  Have a Piper's Pit segment or Barbershop or Funeral Parlor, whatever you want.  Heck, you could rotate out these segments too.  Rotate the talent.  You wouldn't have to have them signed to exclusive WWE deals.  Bring them in and do a short program and let them do their own thing for a while and come back when they're needed.

I also like the idea of doing the Legends Roundtable that's on WWE as more of a TV show too.  Personally, I love hearing the guys talk about the good ol' days and show highlights and share some of the behind the scenes parts of the story.  We don't need to know everything, but it's neat hearing their perspective on things.

Ideally, I'd have Mean Gene and Jesse Ventura doing the commentary on the wrestling show.  Bobby Heenan isn't in the best of health to do the talking.  And of course Gorilla Monsoon and Gordon Solie are no longer with us.

Now how do you decide who's a legend?  I hate saying all guys over 40 get pushed to this show, as I feel like there are guys in their 40's who can still have an impact on the main roster.  Of course all Hall of Famers would be welcomed.  Big stars of the 80's too.  You could also still use some of these guys on Raw and SmackDown! to help PUT OVER the younger guys.  Sorry Hot Rod, no more pin fall wins over the Miz.

Finally, I think this would be a good way to draw in fans from the 70's and 80's and 90's who may have left after the Monday Night wars came to an end.  I would like to think there is a niche for this and the fans who stopped watching would like to come back and see their favorites from childhood have a final swan song.  It's been said before, wrestlers never really retire, and I think it would be a fun way to pay homage to the men and women who we cheered for back in the day.

Posted by Kevin Hunsperger at 3:39 PM