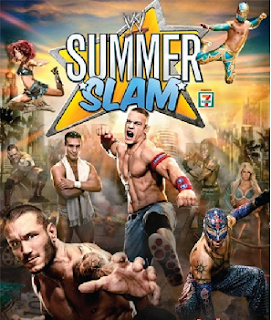 SummerSlam is just 10 days away.  And right now, there are only 3 matches announced.  This stinks for any pay per view card, but consider the fact that SummerSlam is one of the original big 4 PPVs, this is even worse news.  By waiting a week or less before the show, it makes it seem less important.

Right now, we've got a CM Punk vs. John Cena title unification match.  Christian vs. Randy Orton for the umpteenth time, and Kelly Kelly vs. Beth Phoenix for the Divas title.  Now I won't spoil it for you, but there is one other match that gets added on Friday Night SmackDown!  But still, that's only 4 matches.  I know they'll add more at Raw and probably even the next SD.

The WWE has too many PPVs and programs that they've lost all focus on setting up good feuds and letting them simmer.  Orton and Christian, while compelling has lost its sizzle because these two have faced off on SmackDown, as well as the last 3 ppvs.  It's getting a bit repetitive.  That doesn't include all the extra tag team matches they've faced each other in too. This of course goes back to the underlying problem of their not being fresh talent pushed to the top.

Even the Punk-Cena match has lost its appeal to me because I feel like they hot shotted Punk's return.  He could have reappeared at SummerSlam, not in a match though.  There are ways they could have made that happen.

Okay, enough complaining.  My magic wand solution would be cut the number of pay per views, push new talent, and keep guys from fighting each other week in and week out on free TV.  Whether you agree or not, I want to know your thoughts.  Post them here, on Facebook, Twitter, or YouTube.
Posted by Kevin Hunsperger at 12:37 PM