Feel Like I've Been Run Over By a Mack Truck 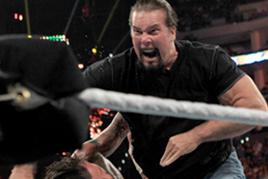 All photos come from WWE

Two hours after SummerSlam ended, and I still don’t know how I feel about the show. I had low expectations going into the show and during the first 90 minutes felt those expectations were easily exceeded.

The opening six-man tag and Sheamus/Mark Henry were solid matches. The Divas Title match was the best match of Kelly Kelly’s career even without the almost depantsing Beth Phoenix almost gave her. Wade Barrett vs. Daniel Bryan showcased two potential break out stars. Then came the two title matches and the train went off the rails. 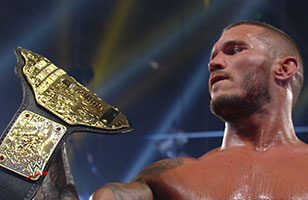 Before the Christian/Randy Orton match, Christian brought out Edge to be his special corner-man. Instead, Edge belittled Christian about being a whiny little bitch. After Edge’s promo I thought Christian had to win the match to solidify his position in the main event. Orton and Christian had a solid back and forth impressive No-Holds Barred Street fight. Then the ending came and Christian ended up on his back once again. Yet again, WWE felt the need to put the title back onto Randy Orton. Either Christian gets shuffled down the card and looks like a chump who couldn’t hang with the big dogs, or the Christian/Orton never ending feud keeps going. Neither path sits well with me. I don’t understand why Christian is treated like a second rate wrestler. Or why anyone besides John Cena and Randy Orton aren’t treated like credible main event level talents.

Anyone who’s read the blog over the last month knows I was not a fan of John Cena and CM Punk having a rematch for the WWE title so soon. After last Monday’s Raw where Triple H named himself special guest referee, I really wasn’t looking forward to the match. Given the verbal slams CM Punk had thrown at Triple H concerning Punk’s opinion of both H and his wife Stephanie, I cringed with anticipation of Triple H either somehow screwing Punk over, or we’d see an unnecessary swerve with Punk and Hunter aligning forces. Neither scenario was one I cared to witness. During the course of the show, Stephanie McMahon had several backstage segments. This raised my spidey-senses even more as she hasn’t been on TV in years. 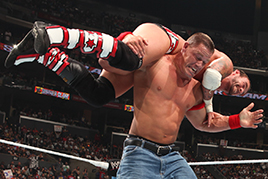 John Cena and CM Punk didn’t have a bad match per se. But with my anticipation of anything except a clean finish, I had trouble getting into the match. I was sitting there waiting for the inevitable. Finally Punk hit the Go 2 Sleep on Cena, made the cover and Trips made a three count. But wait, Cena’s foot was on the bottom rope; clearly they’re going to restart the match. Nope. Okay, Cena says something to Triple H before leaving the ring. Okay, now Hunter is going to give Punk the pedigree, right? Nope. Hunter raises Punk’s hand in victory then leaves the ring applauding the champion. All of my fears have been for naught. Punk is champ and the show is going to go off the air without a hitch. Wait, what’s going on in the ring? Big Daddy Cool Diesel who hasn’t been seen since the Royal Rumble is in the ring and he power bombs Punk. Why? Here comes Alberto Del Rio with the Money in the Bank briefcase. Del Rio hands the briefcase to the referee, the bell rings, one dropkick and three seconds later there’s a new champion. What I thought would ultimately happen happens. 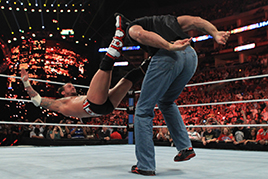 I still don’t know how I feel about this turn of events. Part of me feels they cut the legs out from under CM Punk. What was the point of having Punk win the title at MITB only to lose it a month later? Still think they should have strung out the story of Punk holding the title hostage storyline for at least another three months. John Cena loses the match with his foot on the rope so now he can claim he was unjustly beaten. This means Cena will most likely still be hanging around the title scene much to my dismay. I’m still not on the Alberto Del Rio bandwagon so seeing his with the strap doesn’t excite me. The only real intriguing situation to come out of SummerSlam is who hired Kevin Nash? Is he Del Rio’s new muscle? Did Triple H bring him in to lay out Punk and now H can claim ignorance so as to keep his hands clean? Did Johnny Ace sign Nash under the powers of his Vice President of Talent Relations position? Or maybe Stephanie brought in the mighty Diesel to avenge her honor. Whichever situation is revealed to be the correct one, I’m sure I’ll lose interest 30 seconds after finding out. It’s 2011 Diesel’s warranty expired in 2000. 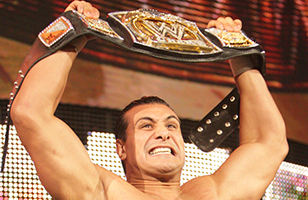 Overall SummerSlam was well worth the $10 I paid to see it. The undercard was solid and showed there is a lot of talent that should be moved up the card. Putting the World Title back on Orton and taking the WWE Title off of Punk though left me shaking my head and wondering who in charge doesn’t like Christian and CM Punk.