I'm not going to pick about the Hardcore Justice pay per view from Impact Wrestling, because honestly I didn't see the show.  I don't feel like it's totally fair for me to write a recap of an event that I didn't watch.  And reading the results doesn't always give you a true sense of what happened.

With that being said, I am going to focus on Kurt Angle's new reign as the Impact Wrestling champion.  At 42, he's obviously no spring chicken.  But clearly, Kurt can still go.  I saw him at an Impact show earlier this summer and he looks great.  A lot leaner and meaner than his days in the WWE.  And considering the man he beat for the title, Sting, is 52.  It's not exactly a young man's business.  Or at least it doesn't seem to be right now.

Again, I have nothing against Kurt Angle as the heavyweight champion.  A while back though, Kurt had announced plans to start training for the U.S. Olympic wrestling team.  He won the gold on Team USA back in 1996.  He's one of the few professional wrestlers today who I believe could actually do it again.  But I don't know if the aspirations to be an Olympian are real or just part of an angle (not Kurt or Karen).

The decision to switch the title again so quickly also brings up a topic we've talked about often: the devaluation of the world championship.  The WWE has a history of playing hot potato with its titles too.  I think it's safe to blame this phenomenon on the short attention spans of today's society and the fact that there are 12 PPVs by each company every year and hundreds of hours of programming on free television. The days of a 6 month title reign appear to be over.  Could you imagine another 4 year champion like Hulk Hogan in the mid 80's?  Or a 7 1/2 year reign like Bruno Sammartino had?  If you've not heard of Bruno, google him... 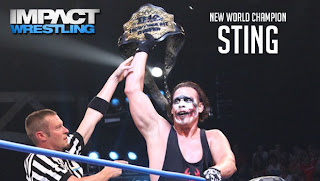 Back on the focus of this post, Impact Wrestling has had six world title changes in 2011.  Each one of those champions (Sting, Kurt Angle, Jeff Hardy, and Mr. Anderson have been top stars in another company)  It goes back to the argument we've made before, Impact Wrestling really needs to create and/or groom some of their originals for a run with the title.  Now that the WWE has released a handful of superstars, will Impact pick them up too?  Only time will tell.

Kurt Angle is a great wrestler (in my top 5 of all time greats), but I think it's time to start developing some younger talent and giving them a push.  This is a statement that can be said about the WWE as well.