It’s hard to believe 20 years have passed since the Junkyard Dog died. JYD, aka Sylvester Ritter, was killed in a car accident. He was only 45 years old. I say only because that’s my age as I write this blog.

My first memories of JYD were in World Class Championship Wrestling before he headed to the World Wrestling Federation. He engaged in a match against the Missing Link in what turned out to be a battle of the headbutts. He instantly became one of my favorites. He exuded a certain charisma that made him hard to dislike. I always wanted to be one of the kids he’d pull into the ring and dance with after a victory. Of course, he had a rich history in Midsouth prior to this. However, in my area, we didn’t get Midsouth at that time.
I saw Dog wrestle a few times in person. The first was at a House show in St. Louis. JYD battled Roddy Piper that night, beating the Rowdy one by disqualification after Cowboy Bob Orton interfered.


I was also there the night he teamed with Hulk Hogan to beat Terry and Dory Funk, Jr. He was also a part of the Sam Mushnick Tournament in 1986 in St. Louis. He beat Hercules and Adrian Adonis before losing to the eventual victor Harley Race. 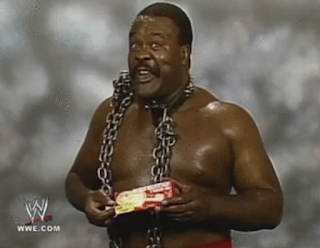 I had the LJN JYD figure. He was the first I tried to customize by panting his red tights white. That paint job didn’t last long and I eventually removed the chipping “artwork”. I also had a Junkyard Dog t-shirt, one of the few wrestling shirts I had at the time.  And my only WWF ice cream bar purchase (from the ice cream man) was JYD.

I was disappointed when he didn’t win the Intercontinental Championship from Greg Valentine at the first WrestleMania. And I booed when his match against Race at Mania III ended so quickly. I held out hope as I watched him make it to the final three of the WrestleMania IV battle royal. But he came up short there too. After leaving WWE and going to WCW I still cheered for JYD. However, I didn’t think he reached that level of popularity he enjoyed up north. A couple big highlights of his career include winning the Wrestling Classic Tournament and pinning Ric Flair in a non-title WCW World Title Match. I’m glad he was inducted posthumously into the WWE Hall of Fame in 2004. Dog certainly earned his spot in wrestling history. RIP JYD.

Posted by Kevin Hunsperger at 4:07 PM