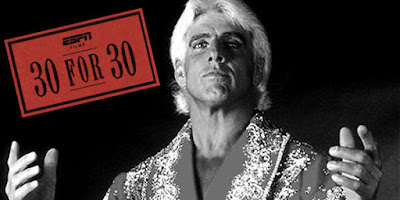 
I have been a fan of "Nature Boy" Ric Flair's for a long time. He's my all-time favorite, so naturally I was pumped to hear some mainstream media attention was being cast on Naitch with ESPN's 30 For 30 program. It was a very revealing and honest look into the life and career of pro wrestling's G.O.A.T. Flair takes responsibility for his shortcomings as a husband and father and talks candidly about the highs and lows of his life.

I was hoping to do a blog on 30 things I learned about Ric Flair from the show, but I guess I'm a true fan and couldn't come up with 30 things. So instead, here are some things I either didn't know or had forgotten about.


He appeared on The Sally Jesse Raphael Show in 1985. This was at a time when WWF was taking over the world. I never realized Jim Crockett Promotions was capitalizing on this trend too.

His parents lost a daughter before they adopted Ric.

Ric didn't think he could make it in wrestling and quit Verne's camp shortly after starting, Verne saw something in Flair, tracked him down and slapped him back into reality.

Described his character as "boring" when he first started and before he was "Nature Boy". In those early years, he didn't even want to wrestle as "Ric Flair".

He bought his own limousine.

Andre the Giant was the special guest referee for a match between Flair and Ricky Steamboat. It was in Mid-Atlantic in 1979. The United States Championship was on the line.

Flair inspired hip-hop artists like Snoop Dogg. He's held in high regard in the black community.  "He's one of us." - Snoop.

Told a psychiartist he masturbated twice a day. (Sorry)

Ric confessed to that same doctor that he drank at least ten beers and five mixed drinks a day, every day.

Traveled to Japan three times in the course of two-and-a-half days one time.

Flair could have gone to WWF in 1986 and 1988. I had heard about '88 and that he would have been the guest on the Brother Love Show at the first SummerSlam.

Triple H played a big role in his recovery after the death of Flair's youngest son, Reid.


Ric Flair wants to be remembered as the greatest and most entertaining wrestler that ever lived. As far as I'm concerned he is.

This special was very well done. Kudos to everyone who contributed to it. The animation done for the parts of the story that didn't have video footage was an excellent touch. I'd love to see more on Flair and other wrestlers as well.

Posted by Kevin Hunsperger at 1:21 PM