It's hard to believe but on this night 20 years ago, one of the most talked about incidents in wrestling history went down. Vince McMahon "screwed" Bret Hart at the end of Survivor Series 1997 in what has become known as the Montreal Screwjob. You're reading this, so you're most likely a pro wrestling fan and up to speed on what happened that night. Today I'm just going to share some of my thoughts in the aftermath as well as those of some of the My 1-2-3 Cents Facebook friends.

There are different stories floating around out there as to who truly knew what was going on that night. Some still believe the whole thing was a work. Others, like me, know that the incident was not part of a storyline and one of the most real moments ever. (Heck, it even inspired an adult film, at least that's what I'm told.)

Two decades later, I still feel bad to an extent for Bret. I know it's a business and according to many, Bret didn't want to cooperate that night with the plan. Vince McMahon had every right to protect what is his and he could not afford to have Bret show up on WCW Nitro the next night with the WWF Championship. In that regard, I don't blame he or Shawn for what went down.


Had it not happened, the tide may have not turned into WWF's favor. The Attitude Era was just starting, but I wonder how strong it would have become without that heel authority figure Mr. McMahon coming to light. The Screwjob was the catalyst for that.


I feel bad for Bret not so much for what Vince McMahon did, but with what WCW did with him once he arrived. His run there was nothing spectacular. For some reason, something just didn't connect with him and the audience. A similar case could be made for "Macho Man" Randy Savage and "Rowdy" Roddy Piper too.

Shawn Michaels suffered a major injury months after the Screwjob. It happened at the Royal Rumble in 1998 and by the end of WrestleMania 14, he was physically done. We wouldn't see him wrestle again for four years. I'm not saying karma had any role in that, but I'm also not saying it didn't. Again, I don't blame Shawn for his role in the incident. Like Vince, he had to protect himself and his interests too.

I liked Bret Hart, but I wouldn't rank him in my personal top ten. Despite watching both Raw and Nitro, I was always a WWF guy first. Bret's departure in that regard hurt. He was another big name Superstar to jump ship and at that point, WWF wasn't seeing much of WCW's top talent crossing over. Six months or so later though that would change and WWF would take over again in the Mondy Night War.


So for my 1-2-3 cents, yes, I'm glad the Montreal Screwjob happened. I'm sorry that Bret got hurt as a result though, but I'm happy he and Vince and Shawn were all able to make amends so many years later. But had it not happened, who knows where the business would be today. Now for your 3 cents on the situation...

"I could never stand Bret. So I loved it when they screwed him over. Honestly, it made the attitude era even better. It gave us the evil Mr. McMahon character." - Joshua

"I've disliked Vince for several reasons, but agree with his statement that Brett screwed Brett. Brett was jumping ship to the competition. The infamous madison square garden incident could have been rivaled in infamy by Brett bringing the WWF strap to WCW. You had to understand the times back then to see things from Vince's eyes. WWF was in a decline to a rejuvenated and up and coming challenger which hadn't really happened to Vince at the time." - Michael

"Bret Hart was my favorite wrestler when I was in junior high and high school. I loved everything he did. I was obsessed with the Montreal Screwjob after it happened. I’ve watched Wrestling With Shadows several times, and still, own it on VHS and DVD.

After Montreal happened I was super excited to see Bret go to WCW. I loved the idea of seeing what Bret would do in a new company. Especially with as white-hot as the NWO was at the time.

And then he eventually showed up in WCW a few months later, and it was one disaster after another for Bret. WCW had no idea what to do with him. He should have been on Nitro the very next night and given a live microphone to air his grievances. Why on Earth would they not think that was the best idea possible? I’ll never understand. I believe they initially brought him in as the guest referee like three months after Montreal, but I could be wrong about that.

Bret’s two defining moments in WCW were his match against Chris Benoit after Owen died, and the night he wore the metal around his abdomen and made Goldberg knock himself out.

Bret in WCW was a major disappointment. Tragic really. The kick he took to the head from Goldberg set off a series of unfortunate events that Bret has never really recovered from. To this day Bret seems like a shell of his former self, and still extremely bitter regarding how his career turned out.

I could go on for an hour writing about Bret Hart, so I’ll just stop now." -Sam

"They did Bret Hart wrong. He wanted to go down as a legend on home soil. We all know the Macmahons only care about themselves!" - Matt 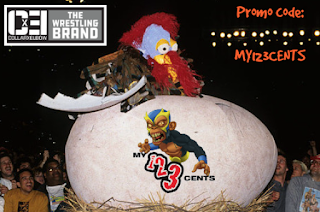 Posted by Kevin Hunsperger at 1:43 PM