One of the greatest tag teams in indy wrestling and dare I say in all of Stride Pro Wrestling has come to an end. In a shocking turn of events, not only did J. Wellington Beauregard turn his back on Ax Allwardt, but so did Ax's partner Scott Phoenix. Maximum Overdrive has come to a screeching halt and I blame the DR Party, specifically Dexter Roswell for this demise.

Months ago Roswell introduced J. Wells as the benefactor for the DR Party. But something didn't feel right as Ax and Scott seemed to start playing second fiddle when it came to their manager's attention. Roswell and his cronies, including Brian Richards, Andrew Edwards and Nathan Bragg would pop up costing Maximum Overdrive matches or just interfering when they didn't need to be around.

The frustration came to a boiling point in October when Ax delivered his patented piledrive to Richards and tried to do the same to Roswell, but that little weasel was able to get away. This all led to a handicap match for Roswell against Maximum Overdrive. J. Wells stayed true to his word and remained neutral for the contest.


But as it looked like the champs had the match won, Phoenix suddenly tapped out to Roswell. Special guest referee Jerry "T-Dog" Travelstead couldn't do anything about it but call for the bell. I then announced that Dexter Roswell was the new tag team champions. Moments later though things became crystal clear and Roswell handed one of the belts to Scott Phoenix. Ax had been double-crossed by both his partner and long-time manager. J Wells celebrated with the new champs as they got the hell out of dodge.

I don't know why all these events happened. But I do know Ax Allwardt is tougher than a two dollar steak and doesn't care who gets in his way, he's going to be ready to kick some ass. He has lost his tag team championship, his partner and his manager. He has nothing else to lose. The DR Party and J. Wells need to be afraid of that. 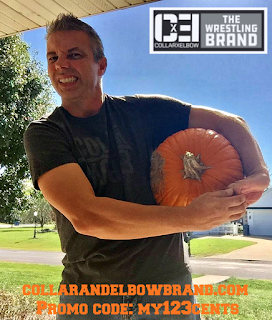 Posted by Kevin Hunsperger at 1:59 PM