The stars of Starrcade

WWE is bringing back Starrcade this evening for a house show in North Carolina. And I just listened to the Starrcade 1987 What Happened When podcast with Tony Schiavone and Conrad Thompson. So it's put me in the mood to write about this iconic event presented by Jim Crockett Promotions and later WCW.

I was always a WWF guy, but I did watch other companies obviously. Starrcade to me was always a big deal but was never really the same after Ric Flair left. Even after returning to WCW, Starrcade had lost its original luster. It may have been because of all the former WWF guys who had come to the company too and the Dusty Rhodes, Tully Blanchard, Nikita Koloff, Rock 'n Roll Express, etc. era had passed us.

My senior year in high school Starrcade '90 came to St. Louis. My buddy Jim and I attended the event which was headlined by Sting and The Black Scorpion in the steel cage. That night was the reveal that Flair was the Scorpion, which most of us figured out when they announced "Nature Boy" was out of the tag team title match with Arn Anderson against Doom. But I digress. Now for a look at who I thought were the Stars of Starrcade.

As I mentioned, I never really felt like Starrcade was the same after that event in '90. Ric Flair had long become the face of the pay per view. He was the main event for Starrcades '83 through '90. He beat Harley Race for the NWA World Heavyweight Championship that first year and went on to defend it or win it each year that followed (90 is the exception when he was Black Scorpion he lost to Sting).

After Flair headed to the WWF in the summer of 1991, WCW's product suffered (at least in my 1-2-3 cents). It was clear at that year's Starrcade when a new concept was introduced: Battle Bowl. I didn't hate the idea of Battle Bowl but would have rather seen it at an event other than Starrcade. It drug down the heritage of the show.

Without Dusty Rhodes, there may be no Starrcade. He was booking for JCP at the time the concept was born. He's credited with being one of the forces behind Starrcade. However, I found it interesting Dusty didn't wrestle on the first Starrcade card. Of course in the years that followed, he became a big part of the show. In 1984 and 85, Rhodes battled Flair for the championship. Naitch won in 84 when the special guest referee Joe Frazier stopped the match due to Dusty's bleeding. A year later, it appeared Rhodes won the gold, but the decision would change and Rhodes won via disqualification instead (a 'Dusty finish' if you will). 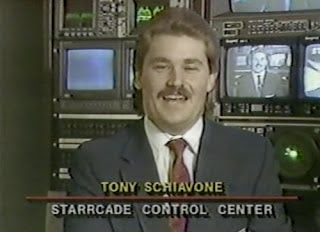 My third and final star of Starrcade is probably an unexpected one, but it's Tony Schiavone. With the exception of Starrcade '89 when he was with WWF, Schiavone was a part of each Starrcade either as a host, an interviewer or a commentator. He was the voice for wrestling below the Mason Dixon line as they say on his podcast. I definitely did not appreciate the work Tony did when he was doing it back then. Years later as I look back and rewatch shows and listen to his stories about the way things were, I respect him even more.

There are plenty of other names who were stars of the show. Sting comes to mind immediately, along with Lex Luger. The two of them had quite a bit of staying power with the product. The Rock 'n Roll Express, Midnight Express and Road Warriors all deserve shout outs too along with the Steiner Brothers, Arn Anderson, Barry Windham and Tully Blanchard. Of course managers JJ Dillon, Paul Ellering and Jim Cornette are part of that discussion too.

Posted by Kevin Hunsperger at 3:20 PM