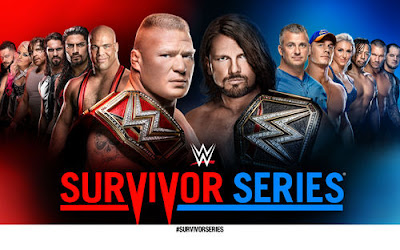 Survivor Series is coming up Sunday night and I'm looking forward to this event. The traditional elimination matches have always been one of my favorite things in professional wrestling. Thirty years ago this month the event debuted. It's morphed through the years and I'm glad we're getting at least a couple elimination matches this year.

Even though I'm looking forward to the 2017 event, I do have some criticism. If they're doing the whole Raw vs. SmackDown Live, there needs to be some kind of repercussions or stipulations involved. Last year SmackDown Live won the men's competition, but what does that mean? The show is still referred to as the "B show" by those on Raw. So my hope would be either make the rivalry mean something or just have both rosters on the same card but do Raw vs. Raw elimination matches and SDL vs. SDL elimination matches.

Enough of that though, here are my predictions for this year's show.

Enzo will beat Kalisto to retain the Cruiserweight Championship.

The Intercontinental Champion The Miz will beat U.S. Champion Baron Corbin (at least I hope).

The SmackDown Live Women's Team will beat the Raw Women's Team in the elimination match. Asuka will either get disqualified or counted out to keep her undefeated streak intact.

The Shield will beat the New Day.

That puts it Raw 4 and SDL 3. It'll be interesting to see how the Shane McMahon, Kurt Angle and Triple H involvement plays out. Someone had suggested Triple H leading an NXT team into battle that night, which would be epic, but obviously not happening. What are your thoughts on this year's card?

Posted by Kevin Hunsperger at 1:49 PM