There's an old saying, 'fool me once, shame on you; fool me twice, shame on me." Ax Allwardt has been fooled once. He won't be fooled again. At the November Stride Pro Wrestling show, Ax was sold out by not only his longtime manager and friend J. Wellington Beauregard but also his tag team partner Scott Phoenix. The duo was known as Maximum Overdrive and was Stride Pro Wrestling's longest reigning tag team champions.

Phoenix and J. Wells have pledged their allegiance to the DR Party and Scott and Dexter Roswell are the new tag team champions. I loved the pairing of Ax and Scott. Clearly, Ax and J. Wells had taken Phoenix under their wings and helped him grow as a wrestler. But something happened along the way and Ax got screwed over.

If you ask either J. Wells or Phoenix, they claim they dumped Ax because of his age. Yes, the Old School Warrior is a veteran of the ring, but there are plenty more piledrivers left from the former Stride Pro Wrestling Heavyweight Champion. Ax is not a happy man. He wasn't ever a happy man, but now it's even worse. He has a lot of pent up rage and anger that will no doubt come through on Saturday, Dec. 9. That's when he gets his hands on Phoenix. It'll be the first time the two have faced off. And Mr. Beauregard better keep his distance, as I'm sure Ax has something in store for his former manager too.

No matter what the motivation was for turning on Ax, the end result won't be good for the DR Party, Scott Phoenix nor J. Wellington Beauregard. That's just my 1-2-3 cents, but I would never, ever bet against a guy like Ax Allwardt. He's not a man to be messed with and that lesson is about to be taught old school style. 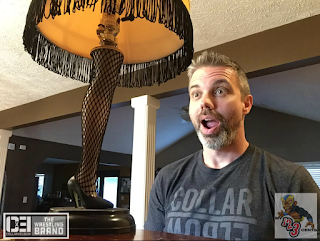 Posted by Kevin Hunsperger at 1:40 PM