Fun Fact Friday is designed to highlight men and women of independent wrestling. Today, I'm focusing on a wrestling company Stride Pro Wrestling has been around since 2016. The first show was held March 5, 2016. Here are a few facts about this Marion, Illinois based company.


In the early days, Stride Pro Wrestling was actually called CMA Pro Wrestling as it was hosted at the CMA Dojo in the Illinois Star Centre Mall.

There have been three heavyweight champions in the company. Ax Allwardt was the first to capture the gold (beating Heath Hatton, Frank Wyatt and Tony Flood in a fatal four-way match). He's also the first wrestler in Stride to hold a second title. He and Scott Phoenix won the tag team titles earlier this year.

Heath Hatton has become the first heavyweight champion to wear that belt and the Legacy Title. His run with that belt was short, losing it back to Tony Flood, who has become the only two-time title holder (of the same championship). By the way, there have also been three Legacy champs.

The tag team titles have had the most holders. To date, five teams have won the gold. Phoenix, thanks to his recent double cross of Allwardt has become the company's only two-time tag team champion.


Stride Pro Wrestling has raised thousands of dollars for a variety of groups in southern Illinois. Jerry Travelstead has led the way on some of these efforts. Greats like James Storm, "Cowboy" Bob Orton, Ricky "The Dragon" Steamboat and Bushwacker Luke have all helped too. Also, the men and women on the Stride roster give their time for these events too. The next fundraiser show is coming to Woodlawn Elementary on Saturday, Dec. 16. 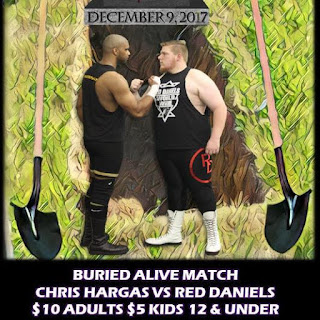 But before that show, Stride will host the first Buried Alive match in the company's history on Saturday, Dec. 9. Red Daniels and Chris Hargas will go head to head in this battle. Bell time is 6:30 p.m. at the Illinois Star Centre Mall.

Posted by Kevin Hunsperger at 6:33 AM