A salute to wrestling's veterans 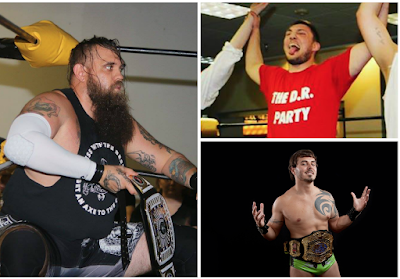 When I posted a similar blog on Memorial Day, I unintentionally ruffled some feathers. So much so that one person on Facebook criticized me for writing about a "fake sport", even though the point of the post was to heap praise on all veterans, not just those who had died. I acknowledged that in the blog. The man was livid with my decision and he not only unfriended me on Facebook but blocked me as well. This wasn't just a random person, it was someone I had actually met and done several interviews with before. I mention all this because I am going to highlight veterans who happen to wrestle as well. If you're offended by that, I apologize now.

Fellow Stride competitor Nathan Brag (Benjamin Abney), who is a member of the DR Party, is currently serving the U.S. as a member of 31B Military Police of the National Guard. His absence has been due to the responsibilities associated with his service.


Shane Rich wrestled for All American Pro Wrestling and Pro Wrestling Collision. We shared the commentary desk for a time while he was hurt. Shortly after the 9/11 attacks, Shane joined the United States Air Force. He credits his military service with giving him discipline and education and pride.

I know all three of these guys personally and again want to thank them for their service. It's never quite enough, but their sacrifices along with all veterans and active duty military are appreciated.

Posted by Kevin Hunsperger at 10:26 AM