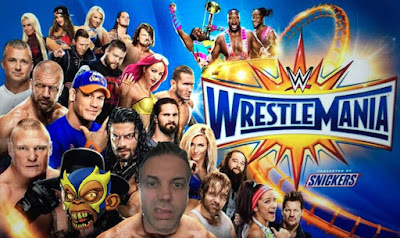 It's the big day, WrestleMania 33 is finally here. In just a few hours Superstars will do battle in the biggest wrestling/sports entertainment event of the year. I'm going to share my predictions, I've gone back and forth on these at one point thinking (and I still do actually) that all championships could change hands. But to keep it interesting, I'm going to veer from some of my original guesses.

Brock Lesnar will capture the Universal Championship. WWE has to do something to make this match more interesting (or at least I hope they do). It can't go 60 or 90 seconds either.

Bray Wyatt will retain the WWE Championship against Randy Orton. I usually never bet against Orton, but I'm making an exception. New members of the Wyatt Family (or maybe just Erik Rowan) will help Bray win.

Roman Reigns will beat The Undertaker and go on to feud with Lesnar as the only guys to beat Undertaker at WrestleMania.

For the Women's Championship matches see yesterday's post. If you don't want to do that, Asuka for the SmackDown Live Championship and Charlotte Flair for the Raw Championship.

John Cena and Nikki Bella will beat The Miz and Maryse, although I'd love to see the opposite happen here.

Kevin Owens will win the U.S. Title from Chris Jericho.

In the most disappointing thing to happen tonight, Baron Corbin will beat Dean Ambrose for the Intercontential Championship.