Cape Comic Con is layin' the smack down 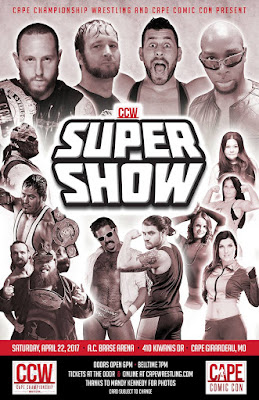 
Cape Comic Con is in its 12th year. The event has always featured some kind of wrestling element. Legends have come in for meet and greets, including the likes of Terry Funk, Jerry "The King" Lawler, Jim Cornette and "Beautiful" Bobby Eaton (who I met & interviewed in 2015). Some years there have been matches. But 2017 will be a banner year for wrestling and comics. Cape Championship Wrestling is part of two big shows.


Friday night, Mickie "Moose" Knuckles won the Girl Fight Luna Vachon memorial tournament. (I had picked her to win on my blog earlier this week). Saturday night (at 7 p.m.) it's the Cape Championship Wrestling Super Show. You can view the full card here, but in addition to the company mainstays like champion Brandon Barbwire, tag team champions Farmer Billy Hills and Dell Tucker and "Sexy" Sarge O'Riley there will be a handful of special guests. Colt Cabana, Joey Ryan and Leva Bates (aka Blue Pants) will be part of the action too.


Stars from CCW will be at the company's booth Saturday and Sunday at the Osage Center as well. I am headed to Cape Con shortly with my buddy iBatman. We will be there through the wrestling show as well. We'll recap the events on Monday's podcast. I'm looking forward to hearing the perspective of a partial wrestling fan.

Posted by Kevin Hunsperger at 11:50 AM