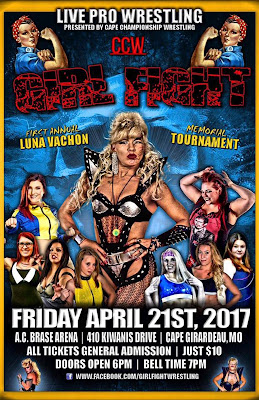 Look out southeast Missouri. The first ever Girl Fight Luna Vachon Memorial Tournament is coming to Cape Girardeau. It's part of the big Cape Comic Con celebration happening April 21-23. The Girl Fight kicks off the weekend. The show is Friday night at the AC Brase Building at Arena Park.

Eight of the best female wrestlers on the independent scene will be a part of this unique event. Scheduled to appear, familiar faces in CCW Sarah Summers, Lil Bit and Nikki Lane. Indy favorites like Amazing Maria, Miss Monica and Ruby Raze will be joined by former NXT Star "Blue Pants" Leva Bates and former TNA star Mickie Knuckles (who I once ate dinner with at Applebee's many years ago).


All eight of these women are highly talented and have what it takes to win this tournament. I've had a chance to see half of these competitors in action through the years. And picking a winner is not easy. But Mickie Knuckles has to be a favorite here. As Jim Ross would say, she's tougher than a two dollar steak and just as fearless. I know it's cliche, but the real winners will be the fans. They will witness eight of the best who will do what it takes to win this special tournament to honor of the wrestling's most unique and iconic women in Luna Vachon.

After the winner is crowned, Final Drive and Eurydice will take the stage and perform a concert. Tickets for both shows are just $10. Head here for more details. And come back the next night for the CCW Super Show.


Posted by Kevin Hunsperger at 1:00 PM