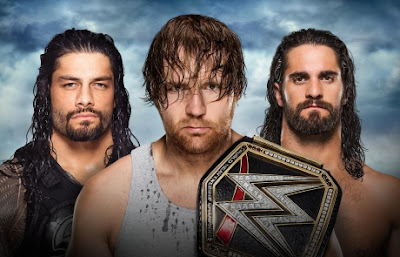 Dean Ambrose will retain the WWE Championship only to have Stephanie McMahon present Seth Rollins with the World Heavyweight Championship the next night on Raw. The only way the brand extension can truly work is to have two separate heavyweight champions. At one point I was for just one champ, but if WWE is going all in on the split two champs have to be the way they do it.

Sasha Banks and Nia Jax will beat Charolette and Dana Brooke. Bayley won't be the mystery partner. Sasha will keep the feud with Charolette going strong and the two will face off at SummerSlam. There's no need to throw Bayley into that mix just yet.

The Miz will retain the Intercontenial title against Darren Young. I just don't see Young as IC champ material, but that's not to say he can't or won't be one day. I do like the pairing with Bob Backlund. Time will tell.

Rusev will beat Zack Ryder. I love Zack, don't get me wrong. But WWE has yanked him around so many times in the past he's not a credible threat to the monster heel Rusev. He needs to stay strong and face stiffer competition at SummerSlam next month.

The Club and AJ Styles will beat John Cena, Enzo and Big Cass. I'm breaking my own "never beat against Cena" rule. Luke Gallows and Karl Anderson can carry on with the feud against Enzo and Cass on Raw and Cena and AJ can wrap things up against each other at SummerSlam on the SmackDown Live side of things.

I like the Becky Lynch-Natalya feud going on right now. Since they're both on SmackDown Live, I'd add the stipulation that the winner of this match becomes the number one seed in the tournament for SDL women's championship, because like I said earlier there needs to be two sets of champs.

The New Day will beat The Wyatt Family. My only reasoning for this is my assumption the Family as we know it is splitting up. Braun Strowman is going to Raw and Erick Rowan and Bray Wyatt will be on SmackDown Live. Plus as the tag team champions, I'd like to see New Day going into the SummerSlam storyline looking stronger.

Despite saying the match is their final battle, I see more life in the Sami Zayn-Kevin Owens feud. I'd rather see this culminate at WrestleMania and if WWE doesn't wait that long than Hell in a Cell with Zayn winning and finally breaking that 'underdog' stature.

The Usos will win against Breezango. I'm not sure WWE is firmly behind Fandango and Tyler Breeze just yet.

I'm probably mostly wrong with these predictions, which isn't a bad thing. I like when WWE comes up with things I'm not thinking.
Posted by Kevin Hunsperger at 7:46 AM