The summer the U.S. Title mattered most 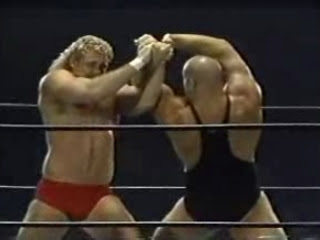 Fifteen years ago when WWE purchased WCW they kept the United States championship among a handful of other belts and of course wrestlers. Through the years those other titles and Superstars have faded away, leaving the U.S. Title the only remaining regular staple of the old WCW days. (The title was unified briefly in late 2001 before coming back in 2003.)

I never felt like the U.S. Title carried the kind of significance it had during the days WCW days. I'd actually take it a step further and argue since the NWA era. Once the Monday Night Wars fully ignited and big matches were a part of weekly TV, championships were devalued with constant changes. Guys who should have probably never worn gold were crowned champion, sometimes for just a few days or weeks. 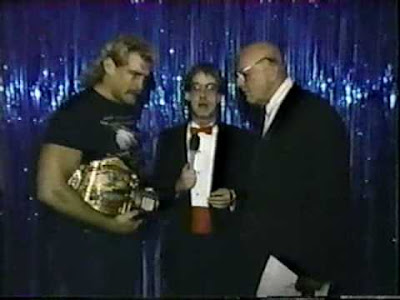 However in the summer of 1986 Magnum TA and Nikita Koloff were a part of a best of seven series to crown a new U.S. champion. It all started after TA attacked NWA President Bob Geigel with a baseball bat. As the champ, he was stripped of the gold and set up the matches between TA and the top contender Koloff.

This was the best thing to happen in wrestling that summer. Despite Ric Flair and Dusty Rhodes being locked in an epic feud with Rhodes beating the champ for the NWA Title, the TA-Koloff feud one upped that. There was so much drama and emotion attached to the series. In the WWF, Hulk Hogan and Paul Orndorff were waging a new war with each other, but NWA was updating the U.S. Title feud on weekly TV programs, as matches happened during the Great American Bash. Back then the Bash was a series of shows around the country. 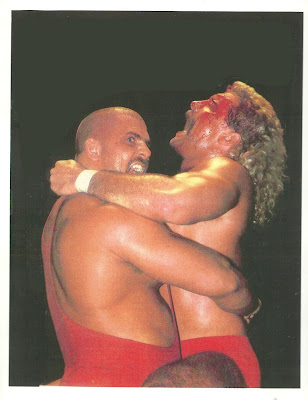 Koloff eventually won the series and the championship. A few months later, sadly, TA would be involved in a career ending car accident that nearly took his life. It's been said TA was bound for a run as World Champion, which I'm inclined to believe as he was one of the best workers in that era.

He and Koloff gave wrestling fans something to talk about in the summer of '86, long before SummerSlam would take the world by storm. TA had an epic feud with Tully Blanchard when he captured the gold in the first place. It's rivalries like these that are missing for the overall storytelling of WWE.
Posted by Kevin Hunsperger at 5:28 PM