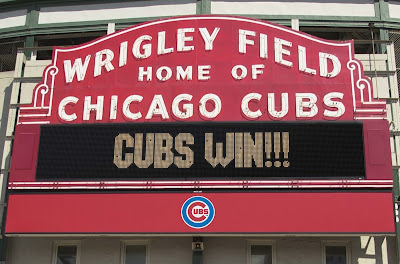 By Chad Smart
@chadsmart & @my123cents on TwitterListen to the podcast
Follow my blog with Bloglovin
I had intended to write this at the start of baseball season. Due to traveling for hockey games and WrestleMania, I didn’t get it written. This is one time my lack of productivity was actually a blessing in disguise. Instead of pure speculation, the Chicago Cubs success in the first half of the season helps strengthen the point I’m about to argue.

“There’s always next year.” I’ve heard that phrase from Chicago Cubs fans ever since I started paying attention to baseball in 1982. The Cubs haven’t won a World Series since 1908 and haven’t even played in the “Fall Classic” since 1945. Over the past century, Cubs fans have held on to the hope that next year would be better and just maybe; the Cubbies would finally rid themselves of the fabled “Curse of the Billy Goat.” The past few seasons have made fans even more optimistic given the Cubs relative success. Last season, the Cubs made it to the National League Championship Series where the New York Mets swept them in four games.

Despite the series loss, several off-season acquisitions had fans eager for the start of the 2016 season. Over the first three months of the season, the Cubs have rewarded fans optimism with a 53-35 record heading into the All-Star Game break. The Cubs have the third best record in the National League and lead the NL Central division by 7 games. Barring a second half meltdown, the Cubs should have favorable odds going into the playoffs. But is a World Series victory a good thing for Cubs fans?

When people think of Cubs, what’s usually their first thought? They’re losers. That’s part of their charm. They have the longest championship drought in all major sports. A World Series victory wipes away over a hundred years of tradition.

The Boston Red Sox were the American League equivalent to the Chicago Cubs. Prior to 2004, the Red Sox hadn’t won a World Series since 1918. Coincidentally in 1918, the Red Sox defeated the Chicago Cubs before going on an 86-year drought. The Red Sox flirted with happiness in 1986 when they battled the New York Mets in the World Series. Up 3 games to 2 in Game 6, it seemed the Red Sox were on the verge of a World Series victory before the infamous Bill Buckner error. Fans in Boston had to wait another 18 years before “The Curse of the Bambino” was broken. Red Sox won the World Series in 2004, 2007 and 2013. After three championships in ten years, the Red Sox have gone from a team of losers to the only team the Yankees play in nationally broadcasted games. 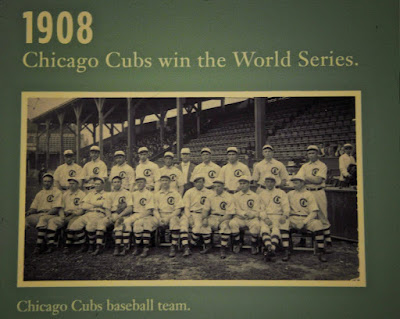 Cubs fans should look at the Red Sox and ask if that’s what they want for their team. Is a World Series victory worth erasing a legacy that has spanned 19 Presidents, the addition of 5 United States, the invention of both radio and television and the birth and death of famed Cubs announcer Harry Carey? Or, should Cubs fans be thankful for a good regular season before settling into a collective refrain of, “There’s always next year.”?
Posted by Kevin Hunsperger at 4:53 AM