Dozens of former WWE Superstars are taking the company to court. Some of the big names involved in a class action lawsuit include "Superfly" Jimmy Snuka, "Mr. Wonderful" Paul Orndorff, Road Warrior Animal, King Kong Bundy, Chavo Guerrero, Jr. & Sr., Sabu and both members of Demolition. Here's the full list of the 51 plaintiffs. 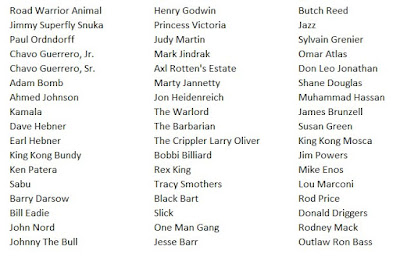 The suit alleges that the wrestlers incurred "long term neurological injuries" in the course of working for the company, while it "routinely failed to care" for them " in any medically competent or meaningful manner" and even "fraudulently misrepresented and concealed" the nature and extent of those injuries.

"Instead of upholding its duty to its employees, WWE placed corporate gain over its wrestlers' health, safety, and financial security, choosing to leave the Plaintiffs severely injured and with no recourse to treat their damaged minds and bodies."
Right now concussions and the long term impact is being studied and discussed at length. The NFL and NHL have faced similar lawsuits due to injuries players have suffered. WWE, the NFL and the NHL have change their policies to help protect Superstars and players. The death of Eddie Guerrero and the murder-suicide carried out by Chris Benoit brought about change in WWE.


I'm not judging anyone who is a part of the suit. My biggest complaint is guys who never wrestled under the WWE banner are also trying to cash in on this situation. To my recollection Rod Price never wrestled in WWE. Guys like Sabu, Axl Rotten and Tracy Smothers suffered the brunt of their injuries years before stepping in a WWE ring. Chavo Guerrero, Sr. only had a handful of matches as did Black Bart and Bobbi Billiard.

My point is many if not most of the names on the list were injured and "forced" to wrestle in companies other than WWE. But because Vince McMahon and his team are the last ones standing, they're the ones with the cash and are expected to be responsible. I have no doubt in some cases men and women have been asked to or have felt obligated to get in the ring despite being injured. Maybe for that they deserve some sort of compensation.


I'll be curious to see what happens to Orndorff and Animal's status in the WWE Hall of Fame. Snuka has already been "removed" due to his court case involving the death of his girlfriend in 1982. By the way the "Superfly" was deemed incompetent to stand trial in that case, which makes me wonder who added him to this class action suit. But it's also unlikely now the likes of Kamala, Demolition and Bundy will ever be inducted. I know there are bigger issues at hand than that, but I digress.

Bottom line: the situation sucks. I'm sure some involved in this case don't want to attack or hurt WWE, but feel they have no other choice in the matter. I'm no legal expert, but I would imagine there could be a settlement in the works. I'd be shocked if this makes it all the way to court. But I'd be even more surprised if WWE is held liable for the injures suffered decades ago.

Posted by Kevin Hunsperger at 2:38 PM