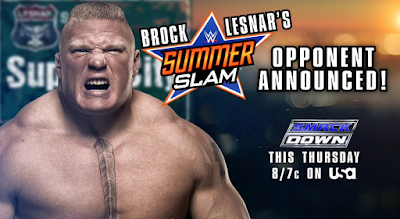 In just a few hours should know who Brock Lesnar will be facing at SummerSlam in August. For some reason WWE is making the announcement on SmackDown before the goes live later this month. It's assumed the announcement will be a part of the Tuesday night taping spoilers. WWE will likely break the news on their own app beforehand as well. However, I could see them inserting a separately shot promo into the edited version of Thursday's show to keep the suspense up and the announcement a secret.

Here's what we do know so far. Brock hasn't been seen on WWE programming since beating Dean Ambrose at WrestleMania 32. There's been little to no activity from his advocate Paul Heyman, which suggests no seeds have been planted for a storyline with any current Superstars. That means anyone on the WWE roster is fair game. Or could the company be looking outside their own squared circle for the biggest event of the summer?

Not only do we need to get through Battleground on the WWE calendar, but also Lesnar's return to UFC before SummerSlam arrives.  It'll be interesting to see what happens if Brock loses his fight and how WWE portrays him after that. I was all in two years ago when he was unstoppable, destroying the Big Show, ending the Undertaker's 'Mania streak and whipping John Cena's ass for the WWE Championship.

But that was two years ago and a lot of happened across the WWE landscape since then. There's a new era emerging. The current build up of guys like Kevin Owens, Cesaro and Sami Zayn needs to keep moving forward. Unless WWE plans on having a new era guy beat Lesnar at SummerSlam and pass the torch, I'd rather see the Beast Incarnate face someone else.

He's got about 18 months or so left on his current WWE deal. That's at least one more WrestleMania. With his appearances sparse, the only way I'd want to see him face someone like Owens (as many are hoping for) is that if he beats KO in August, Lesnar then loses at Mania. But with the intensity of the Owens-Sami Zayn feud, I think it could be sustained through Hell in a Cell in October and there would be no need for an Owens-Lesnar SummerSlam match.

Possibilities on established stars who are not involved in storylines currently would be a returning Randy Orton, Big Show or Kane. None of those ideas appeal to me. Nor does the Undertaker, The Rock or the much speculated Kurt Angle return.

So long story short (too late, I know) I don't have a good guess for Lesnar's opponent. I don't want to see someone like Bray Wyatt, Seth Rollins or even Roman Reigns just be fed to Brock for the heck of it. While there's still some gas left in the tank of the beast, it's time to start the transition of creating the next BFD in WWE.  Who do you think it should be?

Posted by Kevin Hunsperger at 4:05 PM