This is a blog I'd wanted to write for a long time, but just never sat down to do it.  Then I read today that the 25 year anniversary of Magnum T.A.'s car accident was on October 14.  Twenty-five years.  I can't believe it's been that long.

Quick history lesson, for fans who weren't around in the mid-1980's or have never heard of Magnum T.A. let me explain.  Terry Allen was one of the most popular stars in the NWA.  I'd say it's safe to say he was second only to Dusty Rhodes in terms of top babyfaces in the company back then.  When I started watching, he had just won the U.S. Title from Wahoo McDaniel and had defended it against Kamala at the Great American Bash.  I still remember marking out when he hit his finisher, the belly to belly suplex.

Up next for T.A. was a pretty intense feud with Tully Blanchard.  The two put on some very memorable matches, with Blanchard picking up the U.S. title along the way.  Magnum fought back in an intense "I Quit" steel cage match at Starrcade 1985.  (That match is on the WWE Steel Cage Match DVD)  In between his battles with Blanchard, Magnum was priming the pump against Ric Flair, who was the NWA champion at the time.  The two had some memorable matches as well, but Magnum never got that title run.

After phasing out of the Blanchard feud, Magnum transitioned into a program with the big, burly Russian Nikita Koloff.  That lead to a best of seven series between to the two over the U.S. title.  That's because Magnum had been stripped of the belt for conduct unbecoming a champion and clotheslined then NWA president Bob Geigel. 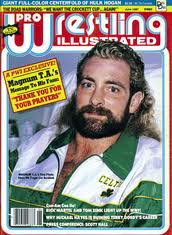 Koloff won the U.S. title in the seventh and final match of the series.  I'm going to put on my assumption hat here and say that Magnum was going to then start a more intense program with Ric Flair over the NWA championship.  But on October 14, 1986, Magnum's time in the ring came to an end as he nearly lost his life in a car accident.  He slid on a wet road in North Carolina and wrapped his Porsche around a telephone pole.  This was long before the age of the Internet, and TV shows were taped weeks in advance. I think I actually heard the news by reading it as the cover story in Pro Wrestling Illustrated.

Sadly, Magnum never wrestled again, but is fortunate to be alive.  He worked hard to rehab and was able to walk to the ring in 1987 and be in the corner of Dusty Rhodes and Nikita Koloff (who turned face in T.A.'s absence) as they won the Crockett Cup Tag Team Tournament.

Had Magnum not suffered that horrific car accident, I have no doubt that he would have won the NWA championship.  I don't think Ronnie Garvin would have had a title run.  And I wonder how much of an impact Sting would have had.  Consider this, about 18 months after that accident took T.A. off the shelf, Sting wrestled Flair in the first of many classics.  It was the much talked about Clash of the Champions time limit draw in March 1988.

Now I'm not saying Sting wouldn't have risen to the occasion, but had Magnum been around, that would have been one less babyface spot open at the top of the card.  But then again, there was a pretty intense wrestling war going on between Crockett Promotions and Titan Sports.  Vince McMahon could have very easily signed the former U.S. champ to the WWF.  Imagine that...

Fans may remember Magnum did show up at Night of Champions a few years ago.  I was glad to see him and hope that one day he too is inducted into the WWE Hall of Fame.  He's another one of those guys who may have never worked for Vince, but has the resume to get into the hall.