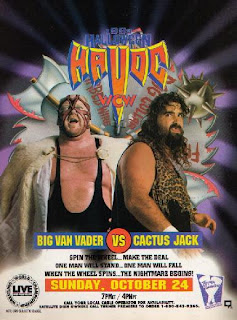 Halloween Havoc 93 returned with the Spin the Wheel, Make the Deal contest.  This time, Vader and Cactus Jack were squaring off.  The show kicked off with a cheesy skit involving some kids and Tony Schiavanoe.  Then they went into the arena with Eric Bischoff in touting the wheel, and then cut to Schiavanoe dressed like Jessie Ventura.  Jess was dressed as "the best gynecologist on Burbon Street."

"Mr. Wonderful" Paul Orndorff (with the Assassin) and Ricky "the Dragon" Steamboat had a pretty good match.  I don't recall if the two ever met up when they were in the WWF.  Orndorff won this one by countout after Assassin knocked out the Dragon with a loaded mask.

This year's wheel for the Spin the Wheel looked more like something out of a cheesy Hollywood western.  There were a pair of longhorns at the top, arrows on the wheel.  Then it started sparkling when it was spun by Vader.  This year, it landed on the Texas Death Match.

"The Natural" Dustin Rhodes beat "Stunning" Steve Austin in a U.S. title defense.  Another great prelude to the Goldust vs. Stone Cold Steve Austin matches in the WWF in the years to come.  The Nasty Boys with Missy Hyatt won the tag team titles back from Too Cold Scorpio and Marcus Alexander Bagwell.

A rematch from Havoc '90, Sid battled Sting.  Sid had spent the last couple of years in the WWF and was back with WCW.  This time, Col. Robert Parker was his manager.  This match was to "determine who is the franchise of WCW."  Duh, I think we knew that before the bell even sounded.  Of course Sting won.  It was such a hokey finish with Parker "accidentally" grabbing Sid's leg, which lead to Sting pinning the big man.

Ric Flair lost his bid to capture the NWA heavyweight title from "Ravishing" Rick Rude by disqualification.  Terry Taylor was the special guest enforcer for the match.  Double ref bump, Rude tried to cheat with brass knucks but lost them, Flair got DQed for using them.  This was back when WCW was recognizing the NWA title as a "world title" too.  I must say Rude's "Halloween" tights were epic.

Vader and Jack battled it out in a brutal Texas Death Match.  Vader was the WCW Champion at the time, but the belt was not on the line. Since there were no disqualifications, Harley Race got involved too.  Lots of chair shots and a battle into the "graveyard" set.  Both men ended up bloodied and battered. Race ended up using a taser on Cactus, who couldn't respond to the 10 count and lost the match.  This was another crappy finish in my opinion.

With the exception of the 6 man opener, this was a pretty good event.  The Sid-Sting match was kinda lame, especially the finish.  The Texas Death match was good, but I hated the finish.  Half the matches on the card were title matches, something we don't see much of these days.  And personally, I missed Jim Ross calling Havoc like he had on the previous four.  He had just left the company for WWF.
Posted by Kevin Hunsperger at 1:10 PM