Spiders.  They're creepy crawlers who freak a lot of people out.  I don't mind spiders though.  They've never really bothered me.  But I thought they're a part of Halloween, so let's find some wrestling spider gimmicks.

For old school fans like myself, the first person I'm going to talk about is a no brainer.  Spider Lady.  She was a masked women's wrestler back in the 1980's.  She dressed in all black, complete with a mask.  Her costume had large spider webs all over.  Spider Lady wasn't around long, but her impact is still talked about today.  Or at least it is for this blog.

In 1985, Wendi Richter was the women's champion.  She was set to defend against the Spider Lady at Madison Square Garden.  At one point in the match, Spider Lady rolled up Wendi, but the champ kicked out at one.  However, the referee counted three and awarded the title to the heel.  Richter was beside herself and grabbed the new champ, ripping off her mask only to reveal the Fabulous Moolah.  Now these two had feuded prior to this over the title.  There are some who say this was the "original screw job", saying that Richter was not in on the title change or the fact that Moolah would be wrestling under the mask.  If my memory serves me, it was the last time we saw Richter (until her Hall of Fame induction in 2010) or the Spider Lady in the WWE.

Another spider inspired character in wrestling was WCW's Arachnaman.   He was played by long time jobber to the stars Brad Armstrong.  The costume was pretty silly.  It was a purple and yellow version of the Marvel Comic Book hero Spider Man.  In fact, the costume looked so much like the real Spidy, that Marvel sued WCW and the gimmick came to an end.  This was in 1991, and I don't really remember Arachnaman having any sort of standout matches or feuds.  He enjoyed some minor success under the mask, including a couple of close calls against WCW TV champion "Stunning" Steve Austin. 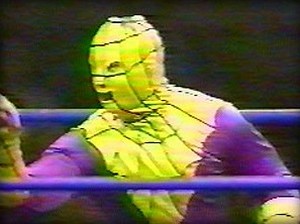 You can see why Marvel had a beef with the costume.  But he also shot webs out of his wrists when he entered the ring.  Arachnaman was also billed from "Web City", not sure what state that's in though.  Brad was always a good worker I thought, he just never really caught a break.  And don't get me started on Buzz Kill...
Posted by Kevin Hunsperger at 1:08 PM