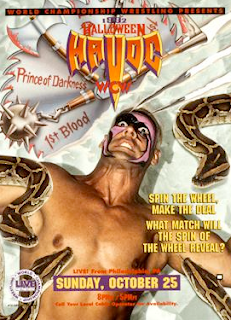 Wow, what a difference a couple of years make in terms of a WCW pay per view.  Halloween Havoc 1992 had a lot of old faces from WWF in the event.  The show opened with Tony Schiavone and Bruno Sammartino running down the matches.  Then Jesse Ventura and Jim Ross were doing the play by play.  I had forgotten Jesse was a part of WCW so early on.

I should also note that this was a definite transition year for WCW.  Of course Ric Flair had been gone from the company for more than a year at this point.  But he'd be returning soon from the WWF.  Secondly, Lex Luger was out of the picture.  It was a little odd missing these two WCW mainstays.

Sting of course was, and is considered the poster boy for WCW.  This PPV was centered around he and Jake "the Snake" Roberts' Spin the Wheel, Make the Deal match.  And once again, this was another cheesy gimmick by WCW.  The set for the wheel spinning reeked of low quality.  It was like a goofy 70's game show meets B Horror film.  Plus Sting's reaction to it all seemed exaggerated.  Anyway, Sting had to spin a wheel that looked like a big buzzsaw blade.  There were 12 options, and where ever the wheel stopped, that was the type of match the two would have.

The wheel stopped on Coal Miner's Glove match.  I think prior to this event, I had no idea what a Coal Miner's glove match entailed.  I wonder if this was planned, or if it was a legit spin.  They had all kinds of props on standby depending on where the wheel would land.  A pole was put up with a coal miner's glove on the top.  Allegedly the glove was lined in steel.  And we're reminded again, this match is not sanctioned by WCW.  Does that really matter?  Nah.  But it's all good.

Pretty basic match between the two.  Jake hit a DDT, which I will still argue was the best in the business.  Sting did a pretty cool jump and spin on the pole.  He climbed for the glove, as Cactus Jack brought Jake's cobra to the ring.  But the cobra bit Jake in the face, helping Sting get the win.  Good Lord, it was a lame way to end the match.  The damn glove was never even a factor in the match.  The snake biting was pretty silly.  The WWF did something similar a year earlier with Roberts' cobra biting Randy Savage.

The WCW World title match was Ron Simmons defending against The Barbarian, in my opinion was pretty weak.  No offense to the Barbarian, but I would have never picture him as a contender, much less on one of the biggest PPVs of the year for the company.  A Ron Simmons-Cactus Jack match would have probably been a better draw.  In my opinion, this was just another way to undermine Simmons' title reign.  Weak opponents=weak champion...

I love Jesse Ventura and JR together doing commentary.  Again, I'd never seen any Halloween Havocs before (except for '91) so these two together was a real treat.

Ricky Steamboat and Brian Pillman had an outstanding match.  Steamboat pinned Pillman, who was slowly turning heel at the time.

"Stunning" Steve Austin teamed up with Dr. Death Steve Williams as a sub for Terry Gordy against Dustin Rhodes and Barry Windham.  Match ended in a draw.  It's fun watching these guys in the pre Stone Cold and Goldust.

Paul E. Dangerously fired Madusa from the Dangerous Alliance.  She then proceeded to kick his ass on the stage.

Despite that firing, Madusa joined Rick Rude as he beat Masahiro Chono by disqualification in a match for the NWA title.  Each man got to pick a referee for the match.  Rude picked Harley Race (Vader's manager) and Chono had Kensuke Saski.  Let me just say, I really, really miss the Ravishing One.   Rest in Peace.

I watched a condensed version of the PPV, but I will say many of the matches were pretty long.  Some over 20 minutes, the tag match went 30.  These guys were able to tell great stories, Rude-Chono and Pillman-Steamboat come to mind immediately.  There wasn't a whole lot of gimmicky, cheesiness on this event like previous Havocs.  (Of course the Spin the Wheel is the exception here)  The undercard definitely outshined the two "main events" of the evening.
Posted by Kevin Hunsperger at 3:00 PM