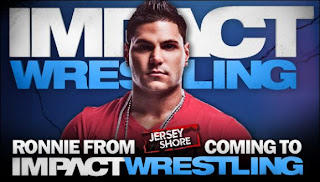 I know I'm late to the party on this one, but I wanted to throw out some quick thoughts on the newest "acquisition" to TNA.  Jersey Shore star Ronnie Ortiz-Magro is making his wrestling debut on the November 3 episode of Impact.  The taping for the show is later this week, so I have no idea who his opponent is or how the match goes.

I've blogged in the past about reality stars getting into the ring.  You can check that out here.  I'm not sure what TNA's obsession is with the Jersey Shore.  They have had two other "stars" from the show wrestle (JWoww and Angelina)  Actually, I'm not sure if JWoww actually wrestled, but she was paid a rather large sum of money to appear on Impact (a show that doesn't charge fans to see in person or on TV).  Did either of these angles result in a boost in ratings?  No.  I think just the opposite happens, you alienate the fans who are watching and frustrate them.

I'm not going to pass a whole lot of judgment yet, because I don't know if this is a one shot deal or if Ronnie is actually going to try to become a wrestler.  Obviously it worked for the Miz, maybe it will for Ronnie too.  If this is a one shot deal, I ask again, why?  Jersey Shore is on OPPOSITE Impact.  So people who are regular watchers of the Shore are not going to be likely to switch the channel, are they?  Maybe I'm wrong here.

One would have to assume that Ronnie will work some kind of program with Robbie E, since he's the Jersey Shore wannabe.  The teaser on the Impact Wrestling website specifically says Ronnie will be making his "wrestling debut."  Maybe he and Eric Young will team up against Robbie E and Rob Terry.  I just hope that if it is a one time deal, they don't make Ronnie's opponent look horrible in the process.  But that's the tendency when a star outside wrestling is brought in.  They're used to make someone on the roster look bad.  It's happened in every company since the beginning of time.  But that doesn't mean I have to like it, right?

And just to be clear, I also complained when Snooki was a part of Wrestlemania 27.  I know with wrestling these days it's also about entertainment and getting that main stream media attention.  I suppose all is fair, right.  At least Ronnie has the look of a wrestler, but does he have the heart and the talent to back that up? We'll find out in a few weeks.