Sometimes in wrestling, characters are based on the best and worst out of Hollywood.  The horror movie genre has generated several different wrestling gimmicks, including Jason, Freddy Kruger, and Leatherface.  That's who I'm going to talk about today.

Leatherface of course is the flesh hungry freak from the 1970's horror classic "Texas Chainsaw Massacre." I don't watch a lot of scary movies, but I'd say this is one that definitely freaked me out.  The man behind the character in the world of wrestling though was a bit of surprise.

Michael Kirchner, who wrestled in the mid 80's in the WWF as Corporal Kirchner, came up with the gimmick.  I found the character so surprising because in the WWF, Kirchner was a flag waving patriot brought in to replace the beloved Sgt. Slaughter.  But the Corporal couldn't hold a candle to the Sarge, and was jobbed into oblivion and eventually released from the company.

In Japan, Kirchner wrestled under the Leatherface gimmick.  It was relatively over with the fans there and he was quite the heel.  I've never really seen any of his matches, but remember reading about them in the Apter magazines when I was a teenager.  Looking at some of the footage on YouTube, the matches are blood bathes, featuring a lot of hardcore moments with the likes of Terry Funk.  Honestly, these types of matches aren't my cup of tea, but I've included a video.  So watch at your own risk. Also, I'm not 100% sure if this is Kirchner as Leatherface or another wrestler. 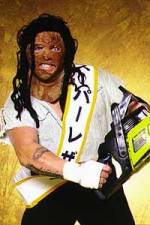 Eventually, Leatherface got a partner, a second Leatherface.  Not sure if they were eventually setting up for a double Sin Cara like feud, but Kirchner ended up leaving after a tag team had a match that kinda got out of hand.  According to what I've read, he leg dropped an open on a bed of nails.

Kirchner jumped around Japan doing a variation of the Leatherface gimmick along the way.  He eventually retired, but came back in 2007 for another run as the chainsaw wielding freak.  He and Jason Voorhes battled Mad Man Pondo and Necro Butcher.  Kirchner is retired now, but you never know when he might get the buzz and start wrestling once again.
Posted by Kevin Hunsperger at 4:13 PM