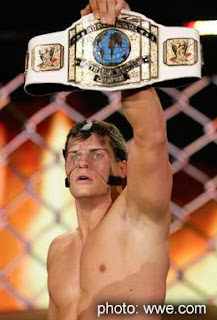 I did not catch the Hell in a Cell pay per view.  Because of a migraine, I wasn't even able to follow along on Twitter and live vicariously through the tweets of fellow wrestling fans.  Instead, I got the results early this morning as I checked my feed.

I'm not going to comment on the actual show, since I didn't watch.  But I will make this point (and thanks to Dave Lagana for reminding me of it).  The WWE title has changed hands eight times in the last 78 days.  From 1978 to 1989 the WWE title changed hands seven times.  Wow.  Talk about putting things into perspective.  And I know there are a number of reasons why it's happening, more TV time to fill, more pay per views, more superstars, fans have less attention span, blah blah blah.  Anyway, I promised to stay on topic, and I'm going to do that.

I want to talk about Cody Rhodes and the new (or old) Intercontinental title.  Because one of the most talked about things I've noticed in the hours since the Hell in a Cell event ended is that the old school IC belt is back.  Cody cut a backstage promo after his match, it's a WWE.com exclusive.

I couldn't agree more with Cody.  I hope the WWE is serious in putting more focus back on the IC title.  In 1999 alone, the belt changed hands 11 times.  And we had co-champions in Chyna and Chris Jericho.   Then there was the brief period where the title was retired.  I've always thought the IC title should have more focus on it.  In the 80's and early 90's guys like Randy Savage, Bret Hart, and Mr. Perfect brought a sense of prestige to the title.  In same cases, they may have been "second best", but we're number one to a lot of fans.

Heck, the Ultimate Warrior even managed to win the WWF title while still holding the IC belt.  I think they should go back to those days when you could believe that could happen.  Savage almost did it.  So did Mr. Perfect.   While we're at it, let's do the same thing with the United States title.  I feel like Dolph Ziggler is doing a great job as that champion.  Actually, the WWE needs to do this with all their titles, including the tag team belts.  Air Boom is a step in the right direction, but more work is needed.

So when I titled this new attitude, I'm hoping it's a new attitude by the powers that be at WWE.  I hope their attitude has improved toward the IC title.  Like Cody said, 19 years ago it was was IC title match that main evented SummerSlam.  And many times it's been the highlight match of the undercard.