By the time Halloween Havoc '91 rolled around, WCW was without it's longest running wrestler.  Ric Flair had left the company that summer and moved to the WWF.  Lex Luger was now carrying the banner for WCW and defending the world title against Ron Simmons.  This was actually the only Halloween Havoc I ever watched.  I think my roommate in college had recorded it for us to see.

The show opened up with video of Barry Windham being injured by the Enforcers (Arn Anderson and Larry Zybysko).  That forced Windham off the pay per view.

The first match of the night, the Chamber of Horrors.  It was a giant cage, much like Thunder Dome from two years earlier.  There were all kinds of "Instruments of Torture" in the cage.  Random people popped out of caskets.  There were handcuffs on the cage.  Kendo sticks.  All kinds of gimmicks. The whole goal in the match was to put an opponent into the Chamber of Horrors Chair of Torture and pull the "fatal level."  There were no pins, no submissions.  Just a lot of brawling.

The two teams: Diamond Studd (Scott Hall), Big Van Vader, Abdullah the Butcher, and Cactus Jack
battled Sting, the Steiner Brothers, and El Gigante.  The match also featured a first, the "Refer-eye Cam."  The ref wore a camera on his head for the match that the director took throughout.  Actually a pretty cool concept.  Not crazy about the name though.

As you can image, this wasn't a pretty match.  There were several times were a guy was placed in the chair, but no one was there to throw the switch and "shock" the opponent.  Jack and Abby juiced early on in the match, no shock there either.  But the shock did come when Rick Steiner belly to bellied Abby into the chair and an unaware Jack pulled the switch.  Lots of sparks flew and the lights were turned down.  The Butcher looked like a guy on death row who had just been put into the chair.  His reaction was priceless as he sat unconcscious, bleeding and sweating all over the place.  When Abby came to he attacked Cactus and all the guys brought to ringside to help him with a stretcher.

Probably the highlight of this pay per view was the WCW Halloween Phantom.  He had been teased as being a part of the show.  Remember, this was pre-Internet, so we didn't really know who was under the mask.  I was surprised to see it was "Ravishing" Rick Rude, returning to WCW after spending about 3 and a half years in WWF.  He had been "suspended" by WWF for making comments about the Big Bossman's mother and fans hadn't seen nor heard from him in almost a year.

Rude may have been one of the most under appreciated guys in the business.  While he had a brief run as Intercontinental champion in WWF, he was largely overlooked.  I think it was because back then Vince focused more on the faces, as it was Hulk Hogan, Ultimate Warrior, and Randy Savage with the belt during Rude's stint with WWF.

Anyway, Rude beat the Z-Man, Tom Zenk at the show.  The fans were sitting on their hands as he came to the ring.  Once he got into the ring and started attacking, it was pretty clear it was Rude. He even ended the match with the Rude Awakening. Of course Tony Schiavone even called the move that.

I'm not sure why, but for some reason they waited until after the tag team title match to unmask Rude along with Paul E. Dangerously and Madusa.  This was the night the foundation was laid for the Dangerous Alliance.  Rude declared war on WCW U.S. Champion Sting.  He vowed to win the title, and sure enough, eventually he did.

After the announcement, Schiavone called it the biggest thing to happen to WCW all year.  While I think it was ONE of the biggest things to happen, I'd say the company stripping Ric Flair of the title and not resigning him was the biggest game changer that year. 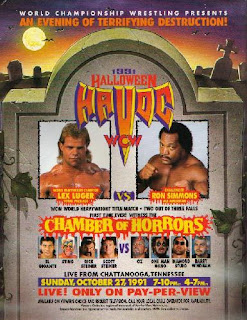 So this pay per view was memorable for me because of the frying of Abby and the debut of Rude.  Other than that, a lot of it seemed like something you'd see on free TV.
Posted by Kevin Hunsperger at 3:08 PM