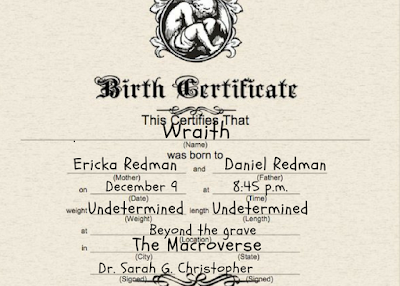 In my day job, I am a journalist. Digging deeper and looking for facts is a part of my daily routine. I'm executing some of those skills for today's blog post. Since his arrival in Stride Pro Wrestling in January, I've been intrigued by the origins of Wraith. I've tried talking to him when he first arrived and got nowhere fast. Even after he won the Stride Cup Tournament and the Legacy Championship, Wraith remained quiet.

Heck, it's only been a couple of months since J. Wellington Bereaguard revealed Wraith's name to the world. So with that little nugget of information, I was able to submit a Freedom Of Information Act request (FOIA) and get more details on Stride's most mystic member.

Let's start at the beginning. By itself, the word 'wraith' is a ghost or ghostlike image of someone, especially one seen shortly before or after their death. After reviewing the birth certificate I received earlier today, I noticed some interesting facts. 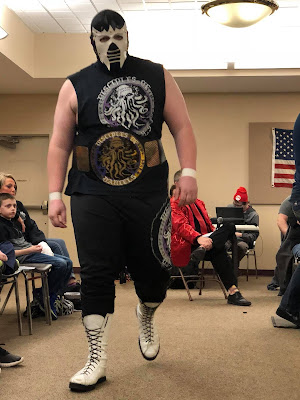 Wraith's birthday is December 9. The year is not included though. For those who remember there was a pretty significant Stride Pro Wrestling event on December 9, 2017. The time of birth was shortly after the main event that night. I've gotta believe that is significant to this story. But the location of The Macroverse and 'beyond the grave' are chilling to me.

I've even struck out with Wraith's Disciples Ryzer and Chase King. Neither man does much talking either. It's as if they've all vowed to stay silent and inflict as much pain on their opponents as possible.

I'm sure their actions will continue to speak louder than any words they would say anyway. The trio attacked and injued Jose Maginficio, keeping the popular star off the Cinco de Strideo show this Saturday night (May 5). Instead, the group will take on Farmer Billy Hills and 'T-Dog' Jerry Travelstead in a handicap match. Bell time is 6:30 p.m. at Carterville Junior High.

Posted by Kevin Hunsperger at 5:19 PM