My top 5 non-WrestleMania moments with Chad

May 13 is my buddy Chad Smart's birthday. He and I met in 2004 when I moved to southern Illinois to take a job at WSIL TV. Chad was the morning show director and we became fast friends bonding over pro wrestling and all things from the 80s. In the spirit of Chad's favorite podcast Tom & Jim's Top 5, I've come up with my top 5 non-WrestleMania moments together. We've been to nine WrestleManias, so there are plenty of lasting memories there.

5. Our Dinner with Ian. In 2005, Chad had the idea to bring Ian Rotten's IWA: MidSouth Wrestling to southern Illinois. We did some research and Chad reached out to Ian. In a matter of weeks, we found ourselves eating a basket of riblets at Applebee's with Ian and Mickie Knuckles. It was a surreal experience, to say the least. A short time later the show happened and that led to Billy Gunn appearing on the morning show. We played Chad's Playstation live on the air. Another surreal moment. Ian ended up bringing his company back two more times.

4. TNA: The early years. When I moved here, Chad had an open invitation to his house each Wednesday night. He ordered the TNA pay-per-views. I had never seen TNA until then and quickly learned more about the company. I was never able to make the road trip with him and other co-workers to Nashville to watch live, but those Wednesday nights at his place were a great time for bonding and learning more about my new found wrestling fan friends. We did make it to a live TNA show when the company held a Basebrawl event at Rent One Park in Marion. Chad flew in for it and we did a meet & greet with several wrestlers, including Kurt Angle. 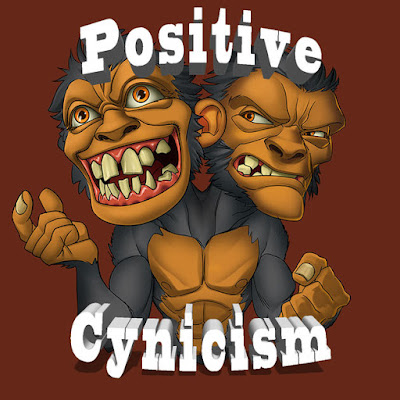 3. Staying positive. About a year ago (I think) Chad created a podcast for the Jittery Monkey Podcasting Network. Positive Cynicism was originally a look at politics and other things going on in the world. Chad has evolved that and has several entertaining features on the show. He's actually inspired me to add new elements to
My 1-2-3 Cents. I've been on his show a couple times and his new pledge to positivity should be an example for all of us.

2. Support Indy Wrestling. After moving here, I discovered there were a handful of independent wrestling companies in southern Illinois. Here are some of my favorites. Chad and I went to an AAPW show (before I became involved). We sat in the front row the entire time with lucha masks on. We were doing a gimmick Monstruos Azules del Dragon (Monsters of the Blue Dragon, but I think we have our Spanish messed up.) Then there's the night we went to Mugsy McGuire's in Carbondale. It was a bar that hosted a show. Maybe 20 people were there. "Cowboy" Bob Orton was in the main event and he signed my LJN card from his action figure. But not wearing his glasses he had no idea what I was showing him at first. Then there's the roadtrip we made to Chicago and Lafayette, Indiana for Ring of Honor and Chikara shows. It was the first live Chikara event I had been to and I have Chad to thank for that introduction. He's also flown back in and attended AAPW and Stride Pro Wrestling shows in the past. What a pal.

1. Hooray for Hollywood. Chad moved to LA in 2007. In 2010, I finally made the trip out. It was in part because WrestleMania was in Phoenix that year and we'd be driving there from Chad's place. I went out a day early and we tackled Tinsel Town. I got to see Madame Tussaud's Wax Museum, famous Hollywood cemeteries, Grauman's Chinese Theatre, The Hollywood sign and much more. We ate at Roscoe's Chicken & Waffles and In & Out Burger, I just need to remember to not order it the way he does because I don't like Thousand Island Dressing. It was a great trip I won't soon forget. All the other WrestleMania trips were great too, I didn't include them because I count them as part of the Mania experience. (My blog, my rules.)

These are just off the top of my head. We've had a ton of fun together and I'm looking forward to many more years of tomfoolery.

Posted by Kevin Hunsperger at 2:01 PM