If you're a wrestling fan there's a very good chance you've heard of Conrad Thompson. I first heard of Conrad when he served as co-host of Wooooo! Nation with Ric Flair. I enjoyed his role on the show, asking questions of some of wrestling's greatest legends. I flash back to October 2015 when I ran my first marathon and had Ric and Conrad along with me as they chatted with Kevin Von Erich.

When it was announced Conrad would be starting a new show with Bruce Prichard I was intrigued. As I mentioned, I liked Conrad's style on the Flair shows and Brother Love was one of my favorite pro wrestling talk show hosts of all-time (second only to Roddy Piper). After the first show about Dusty Rhodes' run in WWE, I was hooked. My only critique of the show was it wasn't long enough. But that problem was soon solved as Conrad and Bruce started digging deeper into subjects on Something to Wrestle with Bruce Prichard.

Not to discredit what Bruce adds to the show. But Conrad does the heavy lifting, conducting research on the topic at hand and providing a detailed timeline leading up to said event. That dedication and attention to detail paid off as a spinoff podcast was created with What Happened When with former NWA and WCW commentator Tony Schiavone.

With that show, I've enjoyed the humor and the progression Tony has made. When things started in January 2017, I think it's safe to say Tony lacked confidence. I credit Conrad with bringing Tony out of his shell and making him a hot commodity in the wrestling world. That to me is the best part about what Conrad does. He gets shit done and I believe helped reinvent one of the greatest voices in pro wrestling. Tony had given up on himself, but Conrad believed and so do millions of listeners. 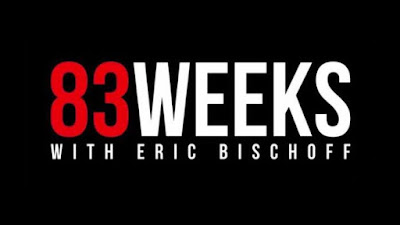 Conrad is working his magic again, this time with Eric Bischoff. I've been a lifelong pro wrestling fan, but a WWE loyalist. So the Monday Night Wars left a bitter taste in my mouth during the 83 weeks WCW dominated. However, the new show, 83 Weeks, has been very interesting. I've enjoyed getting to know more about the decisions and what was going on behind the scenes as it comes straight from the horse's mouth. I have a new found respect Bischoff that I didn't have 20+ years ago.

I've had the pleasure of meeting Conrad and Bruce last summer at a live show prior to Money in the Bank in St. Louis. Conrad was also a guest on the My 1-2-3 Cents podcast weeks after Something to Wrestle With Bruce Prichard started. I value both of the opportunities.

I spend hours each week enjoying the works of Conrad Thompson. His name may not be 'attached' to the title of each show, but he is the heart and soul. I love his hustle and strive to be more like him. That hard work has landed him a gig on WWE Network with Bruce. He's a wrestling fan providing entertainment for fellow fans. And he's created a fan base of his own along with some amazing brands. Kudos, Conrad.

Posted by Kevin Hunsperger at 7:27 AM