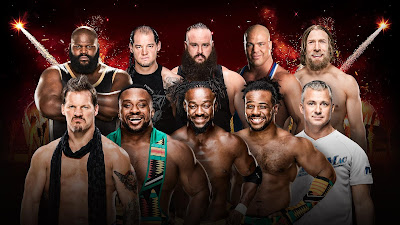 In just a few hours, WWE presents the Greatest Royal Rumble in Saudi Arabi. I'm not going to get into the anti-women sentiment that's coming out of that country. I think we're all on the same page with that. Instead, I'm going to talk about the actual match.

My work schedule would usually allow me to watch the event live on the WWE Network at 11 a.m., but I am working different hours Friday, so I'll be keeping up via Twitter and will watch the show later this weekend. Unlike some critics, I do not hate the idea of this match. I've always loved the Royal Rumble match. And adding 20 more Superstars shouldn't drag down the match. With the high profile Superstars being a part of it, in my 1-2-3 cents there will be plenty of opportunities to tell great stories throughout the course of the match.

Here are some quick predictions for the show:

I'd love to see Brock Lesnar retain the Universal Championship against Roman Reigns and start a feud with Bobby Lashley and eventually drop it to him. However, I won't be surprised if Reigns wins in Saudi and comes back here as champion.

I want to believe Undertaker is going to pass the torch to Rusev and the Bulgarian Brute will win their casket match.

John Cena and Triple H will end in a double DQ or double count out.

Now that Nakamura is a bad guy, I can get on board with him beating AJ Styles and we spend the summer with AJ in pursuit of the championship again.

Seth Rollins will retain the IC Title in the ladder match against Samoa Joe, The Miz and Finn Balor.

The Bludgeon Brothers will keep the tag team titles against the Usos.

What are your thoughts? Weigh in here or on the My 1-2-3 Cents Facebook page.

Posted by Kevin Hunsperger at 9:51 AM