Tonight is the night 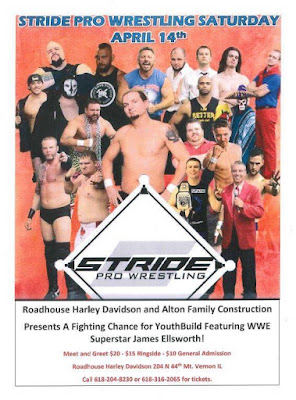 Chances are you probably already know, tonight is the night for Stride Pro Wrestling's latest fundraising event. We're taking the show on the road to Roadhouse Harley Davidson in Mt. Vernon. All week I've written about the card, but today is the final push if you will (inset Dusty Rhodes' impression here.)

This show will be a fundraiser for the YouthBuild program of Marion and Jefferson Counties. Former WWE Superstar James Ellsworth will be on hand tonight as well and there have already been sightings of Ellsworth in Mt. Vernon. I look forward to meeting him tonight. I also look forward to being the referee for the match between Roger Matheus and Cash Borden. My differences with Roger will be put to the side and after it's all said and done tonight the issue between us will be over.

Ellsworth faces off against Wraith for the Legacy Title. You'll also see Wraith's disciples, Ryzer and Chase King in action against Jose Magnifico and Farmer Billy Hills. 'T-Dog' Jerry Travelstead will be the special guest referee that night. Brian Richards is scheduled to take on Chris Hargas. RedneckMania will try to run wild over the California Kid.

A meet and greet with James Ellsworth will begin at 4:30 p.m. at Roadhouse Harley Davidson in Mt. Vernon. Belltime is 6:30 p.m. and a reminder this is a fundraiser for a great cause so please come out and support it.

Posted by Kevin Hunsperger at 10:09 AM